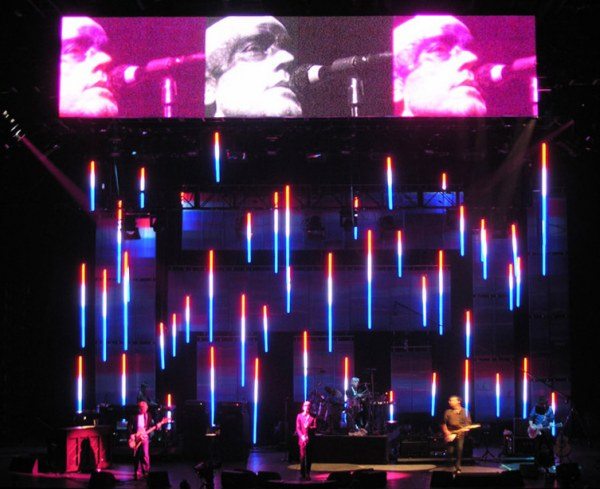 In the interview, Blue talks about his experience working with the band on the tour for Around The Sun, his impressions of R.E.M. Live, and his artistic ethos among other things…

HQ: Blue, hope you’ve been doing well. I wanted to ask you a little bit about the first time you worked with R.E.M. As I understand it, you were doing video mixes and video production/direction at the Manchester Move Festival in 2003.

Thatâs right, I was the screen video director / hands-on vision mixer at that event in â03. Great line up over the three days culminating in R.E.M. who had fascinated me for a long time. To me they had always sounded like aniseed, an interesting and hypnotic taste. Plus I admired their lyrical content and politics.

HQ: And that occasion sort of led to you working with the band on the worldwide tour in 2005? Not that you had one, but what was your job description like in terms of the day-to-day?

BL: In a nutshell, Bertis phoned me out of the blue so to speak, and asked if I could send over the TX tape of what I had done Manchester. Unfortunately it was verboten to record anything but I had the opportunity to let him know that if the band ever took live cameras and screens on tour that I should love to direct it. Then, true to his word, he called me towards the end of 2004 and offered me the gig.

My job description on the Around The Sun tour was video director.

HQ: One of the big moments on the tour was Dublin where the guys played two nights in February at the Point. The second night became the basis for R.E.M. Live. In what ways did Dublin afford the best opportunity to film?

BL: Dublin was a natural choice in terms of timing, how it slotted into the tour schedule, the fact that they played two nights there and that the band felt very comfortable at The Point. The crowd are always especially vibrant in Dublin too, always good value from a filming perspective. You can just feel the show so deeply at this venue.

BL: Actually we had a single strip of LED screen, a Lighthouse screen I believe, that hung from the downstage front truss.

There were inevitably a few general âproblemas tecnicasâ here and there none of which affected the film adversely. But from a directing point of view it was challenging because along with directing seven or eight extra cameras for the film I was still cutting the show cameras for the screen and triggering all the various dveâs for each song. A mental octopus kind of experience. Fantastic.

HQ: How did you approach the video from a stylistic standpoint? Are there any running themes which you built the video around?

BL: Stylistically, Michael had encouraged me to take a lot from the energy, look and feel that I applied to the screen show. I did use some of the equivalent colour grades in the film as were used on the screens too. Essentially my aim was to make you see the sound and hear the pictures. I also wanted each song to present itself as an individual amongst the entire set at the same time not becoming too incongruous. This is why no two songs in the film look the same, because no two songs sound the same in their set. It is in my mind the most loyal way to present their music and who they are as performers.

HQ: Are you pleased with the end result?

BL: Delighted. But you know how it is, I always have feelings about the end product when I watch it through. I imagine thatâs how it feels when artists make records. I hope that doesnât sound too pretentious.

BL: Working with R.E.M. was insightful, liberating, experimental, fulfilling and ultimately enjoyable. A most creative experience. It was how I like to work the most, to be invited to go with my heartâs choices in a visual sense, to enjoy the intellect working in harmony with the spiritual to produce, from the touring angle, a different looking show every night and for the film, something tailored and truly unique.

It was a lot of fun too. They are all superb fellows.

HQ: I know that you’ve done some work with Depeche Mode in the past. Who are some of the other groups with whom you ‘ve worked?

BL: Depeche I worked with last year directing their screen show on tour. I also directed their âTouring the Angelâ dvd and the âJohn the Revelatorâ promo. Some of the bands that I have enjoyed working with in the past and who really stand out for me are Manic Street Preachers, Cure, Beck, The Charletans (who also appeared at the Move festival in 2003), Razorlight, Paul Weller, Paul McCartney, Prodigy, Marilyn Manson. Plus having directed screens at Live Earth in London this year it gave me the opportunity to cut some blinding shows for the likes of Foo Fighters, Chilli Peppers, Metallica. Plus, most recently, Herbert Gronemyer.

There are so many artists that I have admired over the years but I have to say that bands that carry a meaningful banner and that dig deep when they perform are the ones that resonate at the highest frequency for me.

HQ: You’ve won at least three Total Production Awards that I’m aware of and in fact you won the Video Director of the Year award in both 2000 and 2007. Are those awards sort of equivalent to the Grammys in Video direction/production? What was the basis for the two major awards?

BL: Yes, I suppose those awards do provide a Grammy equivalent, itâs always flattering and reassuring to be nominated let alone to win a few. It expresses to me an understanding and appreciation of what I do and the style in which I do it.

HQ: Finally, the same question I asked Jacknife Leeâ¦what’s on your iPod these days?

BL: On my iPod appear a few thousand photos, some video clips. Iâm listening to Passenger, who are some friends of mine from Brighton where I live, Bat For Lashes, Ministry (incidentally, I found out from Bill at R.E.M.âs last show in â05 at Hyde Park that he drummed on Jesus Built My Hotrod), the latest Revolting Cocks album which is outrageous, Anthony and the Johnsons, Joseph Arthur, Goonoo Fish, Fantomas, The Good, the Bad and the Queen, Wednesday 13, the Hoffman meditation process, James Taylor, John Martyn, The Killers, Leonard Cohen, Maximo Park, Nick Cave, Billie Holiday, Edith Piaf, Jaques Brel, Marc Almond and of course R.E.M., my children love Nightswimming.