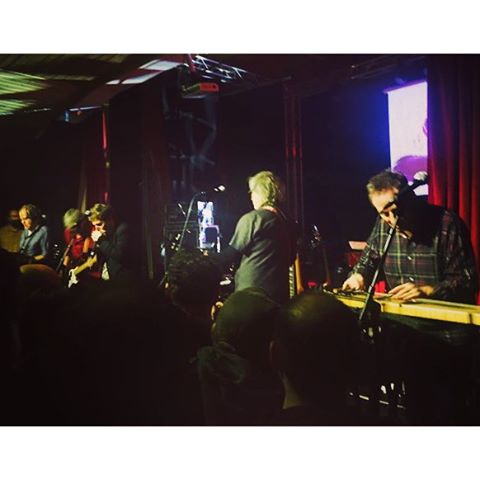 We posted a photo earlier of Mike, Peter, and Led Zeppelin’s John Paul Jones rehearsing backstage at ‪#‎icestationvadsø‬… prepping “Rockville” for the show that took place tonight. That was a cool moment, and here’s another from our intrepid man in the field, Bertis Downs, who snapped this shot of Kurt Bloch on guitar, Mike Mills on bass (and singing a very good Robert Plant), Steve Wynn on epic harp, Josh Kantor on keys, John Paul Jones on pedal steel, and Linda Pitmon on bass playing “When The Levee Breaks.”

Bertis gives some background: “After the show I found out they’d never gotten all the way through the song till onstage right then, and it’s a fairly complicated song to pull off–John Paul said it was always hard to end, so that it was authentic in that respect too. He said it with a big smile and it was really the best part, seeing him so joyful playing the heavy pedal steel grinning like a young polar bear; a close second was seeing Mike absolutely rock the Plant role with grace and confidence, and Linda absolutely kicking the drum part. Ridiculously good and hoping to hear some audio soon.

It was something else. Rock.” #IceStationVadsø

p.s.: sorry about the shaky photo– a real photographer is not in the budget for this sort of thing in front of maybe 300 people in the arctic circle!

This video just in from Chris The R.E.M. Timeline:https://www.youtube.com/watch?v=2bKcFqwmSw8&feature=youtu.be