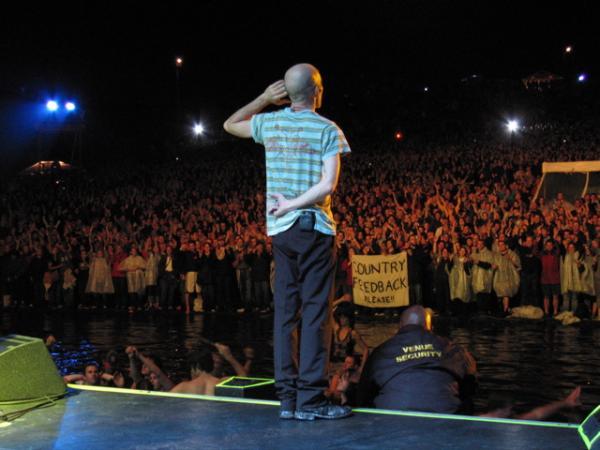 Following their legendary New Zealand “lakesideâ performance on Saturday night, R.E.M. announced today that its upcoming European shows will be an âall wetâ affair: every show will feature a front row pond (3â-5â deep) so that completely crazed fans, as well as others just hot or tired, can enjoy a total immersion front row experience.

Blue (âWaterâ) Leach and Susanne (âSummerâ) Sasic, already the video/lighting team helming the acclaimed production for the tour, said in a brief press briefing that they felt âhumbledâ by the âchallengeâ of incorporating a wetness aspect to all the front row settings facing the trio on the upcoming swing but they said they were unbowed by the prospects: âWe have never backed away from a way of presenting in whatever medium they want to be shown, and as of today, I guess that includes creating a stunning, cutting-edge water component to all the summer shows…I mean, the band rules, we just make it work….I am a little concerned about some of the logistics with the dolly cams in the pit, I mean if thatâs all water…â Leach trailed off as Sasic quickly interjected âWe realize there are still some technical hurdles that need to be addressed, but with the experienced crew we have, we have time to make it happen… I mean Loch Lomond would be no problem and I think there is already a pond at Hyde Park, so thatâs a start,â at which point, Dick Adams, production manager, added helpfully, âWhat this band realizes is that Europe in the summer can be hot as a (multiple expletives deleted). Granada, late may? You kidding? The water thing will be cool, so to speak…â

The band were unavailable for comment, locked into an already-ambitious phoner schedule to various pirate radio stations scattered throughout Australasia and the Caribbean, but longtime advisor Bertis Downs, in an email from some exciting backstage location, lauded their decision to âgo wetâ this summer as a win/win/win for all concerned:

-The fans win, especially the demanding ones who are never happy with their tickets (âThis way anyone willing to take the plunge can be on the front row… I mean to heck with the so-called golden circle…this is a doggone pond manâ)

Tour manager Bob Whittaker, ever the skeptic, and with a long history of working with bands from Seattle, cast the only negative pall on the ambitious plans, snarling âI hate to throw a wet blanket on this whole thing, but can we please lose the ducks if we are going to do it?â)

Fan Club winners are advised normal wristbands already received are now void and must be returned with a SASE in exchange for a new set of âwater wingsâ (you canât be too careful) to be sent C.O.D.