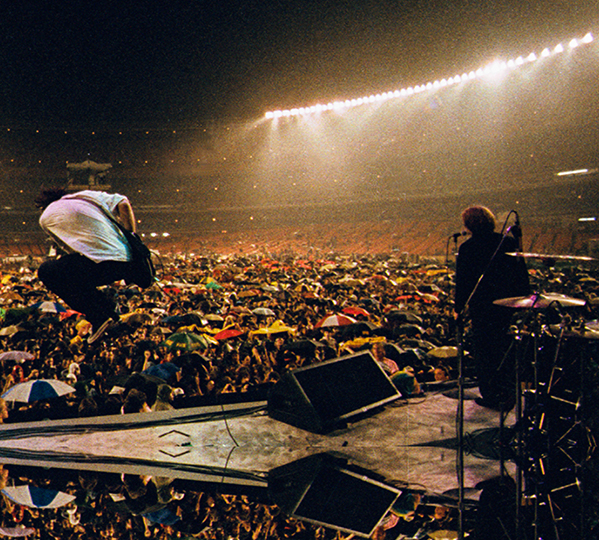 From our dear friend for many years, Michael Plen, radio promotion executive nonpareil and on the side an awesome photographer (he’s making his iconic print available for a limited time at the link below his recollection— and this time it is signed by Berry Buck Mills and Stipe):

“Shea Stadium. R.E.M. opening for the Police. I’d been to Shea as a kid and saw games there, and my only musical reference was the Beatles playing there. I always found it to have a magic that other stadiums didn’t… subtle and historical, tucked away in Queens, NY. I’d been all over the country with R.E.M. in vans for Chronic Town and Murmur, all kinds of venues. This one felt epic….and playing with the Police and Joan Jett was downright spine-tingling.

R.E.M., as always, were cool as a cucumber. If they were nervous, they never showed it. They follied around backstage like it was any other gig, but you could feel their energy and enthusiasm welling up for what was to come. The weather was teetering all day towards rain, and the thought that this event might be “rain delayed” or cancelled was a concern. I’d worked with the Police since their days of drawing only 50 people to gigs and built a kinship with both them and R.E.M. and was allowed to be onstage for this performance. My early work with the Police earned me the chance to become the head of promotion for IRS Records in their heyday.

Rain was light as R.E.M. hit the stage. I’m not sure anyone noticed–it was a performance of lightning (not the weather) and subtlety: Michael Stipe leaning into a massive monument before him, his words blasting forth, obtusely ringing. The devotion of R.E.M. fans who couldn’t believe it was their band at Shea, and the Police’s progressive audience accepting the bolt they were hearing, was endearing. Peter prowled the large stage like a tiger off the leash, Mike Mills locked in place with his brilliant harmonies and rock solid bass, meeting Peter mid-stage only to add some fireworks…all while Bill Berry kept the drive of this performance as steady as a 60’s Mustang, with power, acceleration and control.

Looking thru the lens, this moment brought all of that together in what I call my Peter Buck/Townsend shot: a missile moving through the air that caught the energy of the night and his bodacious rock star style, set against the expanse of Shea Stadium–the look of colored umbrellas meeting electricity captured on the grain of film. Shooting pictures of R.E.M. always captures a flash of their combined energy, but this moment languishes out there for me as the band delivers the high of their music with their brilliance coming into focus at THE event that pushed the movement of music forward like a rocket ship.”