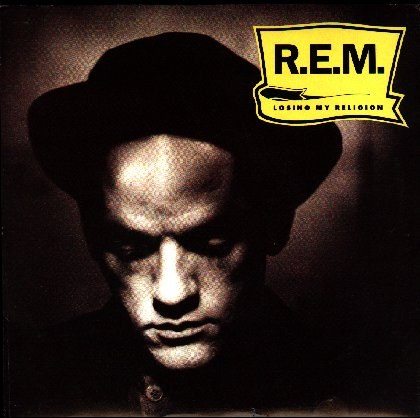 Twenty years on, almost to the day of its release, we’re taking a look back at one of the great songs in the R.E.M. canon.

On February 19th, 1991, Losing My Religion, the first single from Out Of Time, was released on Warner Bros. Records. The song became the band’s highest-charting single in the USA (reaching number four on the Billboard Hot 100) and went on to win two Grammy Awards for Best Pop Performance by a Duo or Group with Vocal and Best Short Form Music Video. In an interview with Rolling Stone (March 5, 1992), Michael revealed the song’s thematic intent: “I hate to make this comparison, but “Religion” is similar in theme to “Every Breath You Take” by the Police. It’s just a classic obsession pop song. I’ve always felt the best kinds of songs are the ones where anybody can listen to it, put themselves in it and say, “Yeah, that’s me.”

Peter told Guitar School (1993) that he knew the band had something special on their hands early on: “I always thought this was the best song on Out of Time, even before it was a single. I really didn’t expect it to be a hit; I just loved the song and the lyrics. “Losing My Religion” is another song that came together in about five minutes. A lot of the ideas were developed on mandolin. As I recall, it was the first song we wrote specifically for the album.”

It’s been said that imitation is the sincerest form of flattery, and “Losing My Religion” has certainly received its fair share over the years. Check out these different versions: