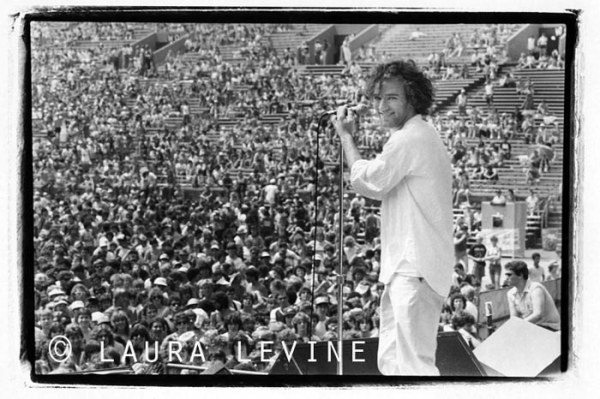 I recall the exact moment when I realized that my favorite band, an underground sensation, had the potential to get very popular. It was August 20, 1983, and I was fortunate enough to be standing on the side of the stage at John F Kennedy Stadium in Philadelphia, as a guest of R.E.M.. They were the first of 4 bands on the bill with headliner The Police, plus Joan Jett and Madness.

Truth be told, R.E.M. had no business playing a stadium show at the time. Heck it was a stretch for The Police to be playing a stadium show. Stadium shows weren’t all that common then except for maybe the Rolling Stones and The Who. This was even before Springsteen’s stadium concerts. But R.E.M. in a stadium? Murmur had recently been released to critical acclaim, but the band had not appeared on TV yet (the David Letterman debut was a couple months later) and was playing small clubs including a date at Ripley’s Music Hall in Philadelphia (capacity 500) that had not sold out just a month earlier.

But hey, someone has to play at 5:00 pm in the blazing sunshine at these extravaganzas, and R.E.M. and The Police shared the same booking agent, so up there they went. While The Police and their entourage rolled into the backstage area in multiple limousines, R.E.M. huddled nervously in a tiny trailer on the back lot. I recall Joan Jett walking in shortly before they took the stage to introduce herself and exhorting them to “kick ass.”

And they did exactly that, ripping through a 30 minute set featuring:

Michael focused his attention on a couple guys who got up to the very front of the stage wearing R.E.M.’s only tee shirt at the time, the famed “stripe down the back” model that I so wish I still had. Peter was the visual center of the band at that time, in constant movement with frequent big leg kicks and jumps. Bill and Mike were an inventive and melodic rhythm section who for my money were far more compelling and soulful than the vaunted rhythm section of the day’s headline act.

Few people in the funky old 1920’s stadium, which wasn’t yet full that early, had any idea who R.E.M. were, but they certainly caught everyone’s attention. People got it. The applause was bigger after each successive song. The band’s unique and signature sound translated to that big of a space. And I still recall standing on the side of the stage, something I certainly had never done, marveling at the spectacle, and thinking wow, maybe, just maybe, these dear friends of mine could one day be headlining a show like this. It seemed far less preposterous at 6:00 p.m. on August 20, 1983 than it would have been just a few days earlier.

And I met Bertis Downs that day. He had just come on board. We immediately hit it off and headed off to dinner to some old school Philly place I can’t recall the name of, long before the Police were done, in an exciting ride in his VW bug the details of which vary too much in our memories for me to report here. But I survived and so has our friendship now 32 years strong. And R.E.M. did okay from that day forward as well. (I regret not attending one of the many stadium shows that R.E.M. later headlined in the UK and elsewhere).

Playing in stadiums was probably never in their collective goals as a young band, but when presented with the challenge, they knew what do. It was a special day and one I will certainly never forget.

Note: this is the first time this photo has been ever posted (we think!). Another great shot from pal Laura Levine; check out her amazing pics & follow Laura on Instagram & Twitter: @lauralevinepix