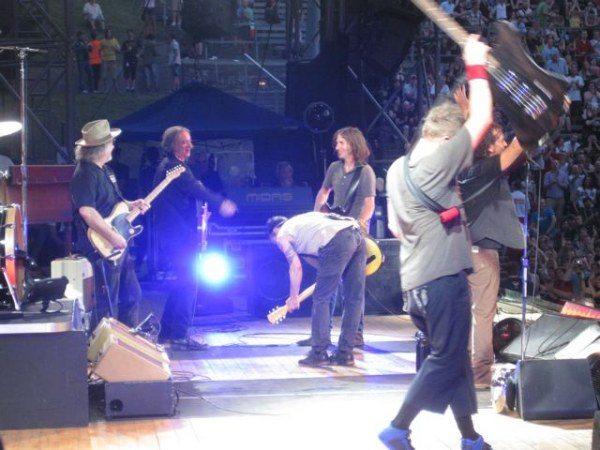 As we get ready to head into the Independence Day weekend here in the States, we wanted to wish all of you who celebrate it a happy 4th of July.

The band continues to record in Berlin with Jacknife Lee and by all accounts, things are progressing nicely. Read Bertis’ “Postcard from Berlin” from earlier in the week for the low down with photos from the studio by Bertis and Jacknife Lee.

In other Berlin news, Peter and Scott McCaughey took a little time away from recording last night and joined Pearl Jam onstage at Wuhlheide Park in Berlin for a cover of the MC5’s “Kick Out the Jams.” Bertis, who was also in attendance last night, said, “The show rocked hard and anyone with tickets to their next two weeks of shows here in EUR is lucky indeed– these guys are at their best.” A slew of photos by Dewitt Burton accompany the story at HQ and Pearl Jam.com has a couple of shots in their photo gallery.

And speaking of Pearl Jam- check this out:

FABLES REISSUE OUT THIS MONTH

As we’ve reported previously, the Fables of the Reconstruction reissue is out this month on July 12th everywhere excluding North America where it will be released the following day, July 13th. The new edition features the digitally remastered original album, plus 14 previously unreleased demo recordings, cut prior to the album’s studio sessions, including one long-sought track that has never been released. The commemorative release also adds insightful new liner notes by Peter with the 2CD package presented in a lift-top box with a poster and four postcards. On the same date, the remastered original album will be released on 180-gram vinyl. We learned today that one of the bonus tracks, “Throw Those Trolls Away,” is currently #2 on the Specialty Singles Chart… Check out this review of the Fables reissue in Entertainment Weekly in which they give the record they call “a haunting collection of Americana tales…” an “A.”

TIRED PONY ONE OF Q’S ESSENTIAL

The forthcoming Tired Pony record on which Peter played has gotten a glowing review from Q Magazine who calls it “a record of real resonance and cohesion; one that carries with it a sense of everything coming together in the moment.” “The Good Book,” a standout track on The Place We Ran From, has been tabbed one of Q’s “Essential Tracks To Download This Month.” Visit Tired Pony’s website to listen to select tracks and watch a video and also be sure to pick up the record when it comes out on July 12 (US release is September 28th). Tired Pony will be playing their debut show in London on July 14th. Those fortunate enough to hold tickets to the sold-out appearance are in for a real treat based on what we’ve heard of the record.

p.s. Bertis urges anyone who likes World Cup football to check out the little Football icon on most any YouTube video– it provides a little of the buzz that is in the air in Berlin, starting again tomorrow afternoon

R.E.M. HQ · 2 hours ago
@remhq
Thrilled to see continuing progress in the movement to finally get recording artists paid when music is played on the radio https://t.co/1IL6Fw87vz #MusicFairness
View on Twitter
10
32