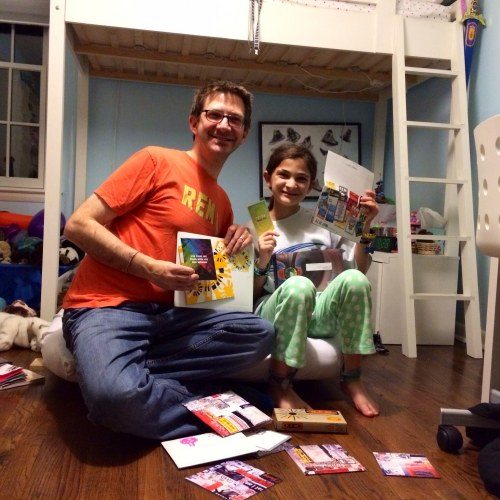 With the holiday season officially upon us now, we wanted to share a special personal reflection from a longtime R.E.M. supporter from Baltimore with a unique connection to the band and fan club. In the following, Adam Rosenberg, a member of R.E.M.’s fan club for many years, muses on the joy he received each December from the highly-anticipated R.E.M. Fan Club Holiday Package and the extended joy he has received from being able to share his holiday collection and his favorite band with his ten-year old daughter:

Postcard from a fan: Reflections on the fan club

December comes now and its bittersweet to travel to the mailbox and not find an Xmas single from my favorite band R.E.M. As the weather got cold every year, I always looked forward to that extra gift just for me in the mailbox of the R.E.M. Christmas Single. With anticipation I wondered what the design would be, what extras would be included, and of course, what rarities would be shared. A video of the performance at RFK with Radiohead (I was there), the stellar cover of Big Star’s “Jesus Christ”, and the live version with Wilco of ITEOTWAWKI where Michael refers to Mike at “Asparagus Mike” have all become a part of my musical DNA. Being a member of the fan club meant setting a reminder every fall to ensure that I renewed my membership in time to be sure that I received one of these coveted prizes. I kept every package intact, delicately opening it up, never using the stickers, and keeping them in pristine condition like they each were relics. It was always a great day when the single arrived and I’d call my other R.E.M. friends to compare notes. When the band called it quits, and the last of the holiday singles arrived with the simple note of “Live your life full of joy and wonder” with a cover of Perfect Circle, it too was a fitting if bittersweet conclusion.

In a nice moment last week, I showed my collection to my 10 year old daughter who was fascinated by each edition. Sophie’s grown up listening to R.E.M., so she certainly knew the band was meaningful to me. She’s seen the shirts that date back to Fables, every original and reissue, and the autographed cover I won at the Collapse Into Now release party. Sophie knows this band means something special to me. So, when I shared the Holiday collection, it was like she discovered her own ark of the covenant. She couldn’t believe her eyes. The designs and detail fascinated her. She loved the stickers, stamps, patches, and the designs. As each package opened, she exclaimed in delight “can I have that” – to which I naturally told her no. These are my prized possessions, and from one collector to another (and she has quite a collection of her own treasures), she understood. Her only wish was that I would have joined the club sooner so that I would have had all the singles as my collection dates back to 1998. And her request was that I pass the collection on to her one day!

That night we listened to old singles together, admired media so foreign to her in today’s digital age such as the blue single from 2000 and the video tape from 1998. It was a great moment in time that I had to share with HQ. And while she has always had an appreciation for all things R.E.M. I think tonight her connection to my band just made a little more sense.

Merry Christmas and Happy New Year to all!

From HQ: Many of you might remember a moving video put together by the Baltimore Child Abuse Center in April 2011 featuring R.E.M.’s song “It Happened Today” (watch the video). The video focused on the many ways BCAC keeps children safe from sexual abuse and gives them a voice in the process. Adam Rosenberg is the BCAC’s Executive Director.