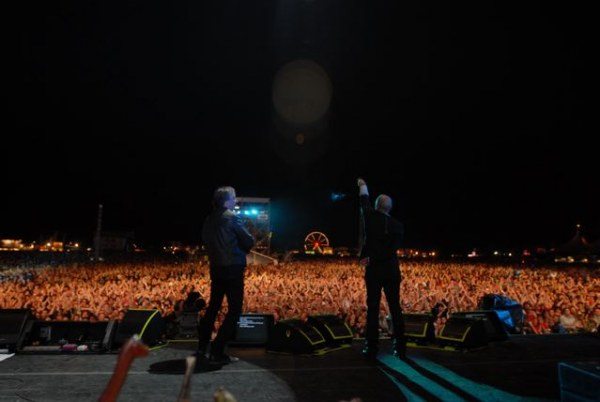 Last night’s OXEGEN at Punchestown Racetrack near Dublin was one of the best festival shows I have ever seen R.E.M. play. Something just happened between the band and the Saturday night audience, and a very special show ensued. From the opening with Begin the Begin through the encore of Supernatural, End of the World and Man on the Moon, it was a ferocious blast with very little let-up. Just pure adrenaline and spirit.

Here is the setlist just to give an idea of how good it was in that amazing, huge setting:

1. Living Well Is the Best Revenge

It certainly added to the legendary Dublin shows the band has done over the years. To me this one might have just been the best.

Tonight we are outside Edinburgh up in Perthshire for the Scots equivalent, T in the Park, which the band last played in 2003. Both of these festivals have also included the National as well, and it is great to see those guys again.

From here to Dresden and Berlin and on to Switzerland and Italy on the weekend– on we roll.

p.s. The Berlin show will be broadcast on Radio Einz and affiliated stations in Germany– check local listings.

p.p.s. Watch soon for the new Man-Sized Wreath video, directed by the CRUSH firm in Toronto, coming to a screen near you.