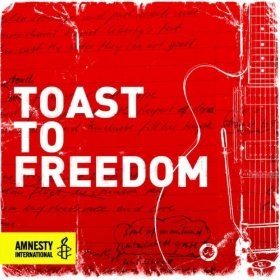 You can find out more about the song at ToastToFreedom.org. Net proceeds from the track will benefit Amnesty International.

To mark the occasion as the song is launched, Amnesty International is asking people to take action on behalf of Chinese journalist Shi Tao, Tibetan filmmaker Dhondup Wangchen, and others whose basic right to free expression is being violated. For more information and to take action, please visit amnestyusa.org.

Suzanne Nossel, executive director, Amnesty International USA, said: “Toast to Freedom is an inspired tribute to millions of dedicated human rights activists all over the world. The songwriters salute every individual Ã¢â¬Ëunited in the dream for victory,’ reflecting the spirit of our movement — that each of us can contribute to a better world. We are deeply grateful to all of the musicians involved in creating this gorgeous song.”

The basic tracks were recorded at the legendary Levon Helm Studios in Woodstock, N.Y, affectionately known as “the Barn.” Helm, a four-time Grammy winner, who died April 19, had staged intimate, multi-artist concert performances known as the “Midnight Ramble” at the studio. Producer/engineer Bob Clearmountain (The Who, Paul McCartney, Rolling Stones, Bruce Springsteen) produced the track, which was then sent out to artists, who added vocals.

“Toast To Freedom” was inspired by Carlton, a longtime supporter of Amnesty International, who suggested teaming up with Wilms on a commemorative project to mark the organization’s 50th anniversary.

Following Helms death on April 19, Wilms said: “Levon was one great soul. I am so grateful we got to work with him, his outstanding band and team in his barn in Woodstock. He was an inspiration and our muse. The song “Toast To Freedom” is dedicated to Amnesty International but in a certain way is now a “Toast To Levon” and a celebration for him as well: Truth, heart and soul were always part of Levon’s DNA and are the essential basis of Amnesty International and our project. We will miss him and love him forever.”

Shipsey said of Helm: “On behalf of Amnesty International’s millions of members around the world I want to say how grateful we are to Levon Helm for his generous artistic contribution and support that will make a real difference to our life-saving work around the world. We in Amnesty owe him a huge debt. The best way to repay that debt to him is by continuing our work. Levon Helm created with 50 international musicians some musical magic for Amnesty. This happens when goodness and love combine with kindness and art to produce beauty and power leading to unarmed truth — still the most powerful thing in the universe.”

Filmmaker Natalie Johns of Dig for Fire captured all stages of the international production on video. Johns is known for her works with such artists as Jay-Z, Peter Gabriel and The Rolling Stones. The project will be featured in a short “making-of” documentary as well as a companion music video.

In 1962, Amnesty International evolved from a one-year campaign to free political prisoners — the inspiration of a British lawyer outraged by the injustice he saw worldwide — into a global movement fighting for justice, freedom and human dignity.

“Our hope from the very start was to bring the message of freedom and human rights to a global audience,” said Shipsey.

“Toast To Freedom”, a new and exclusive commemorative song for Amnesty International to conclude its 50th anniversary year, performed by a spectacular selection of iconic artists and dedicated to human rights activism around the world.