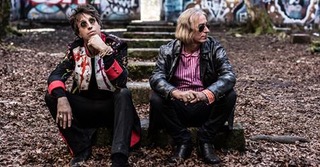 Exciting news for R.E.M. fans and fans of Joseph Arthur. The new album by Peter Buck and Joe Arthur (the duo is called Arthur Buck) is featured at NPR Music’s First Listen. You can stream the album in its entirety.

Here’s an excerpt from the article at NPR:

The first recorded collaboration between singer-songwriter Joseph Arthur and guitarist Peter Buck of R.E.M. fame isn’t a concept album in the strictest sense. But many of its songs do revolve around a central theme: The messy metaphysical process of getting “woke.”

The album will be released by New West Records on June 15th.