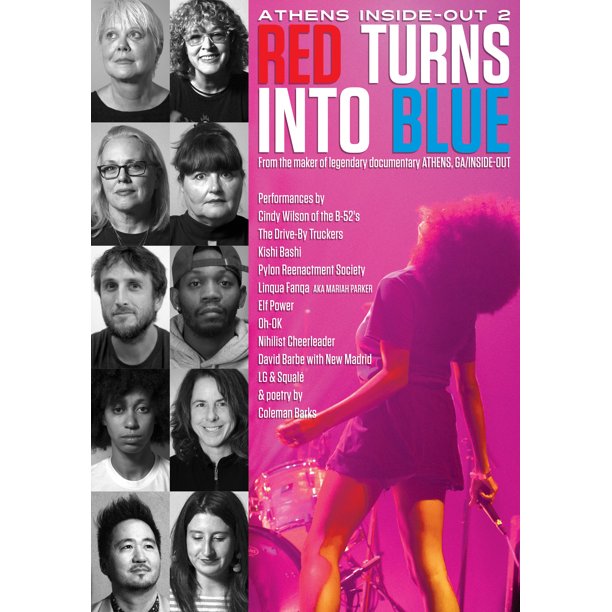 Many of us have fond memories of the legendary 1987 documentary Athens, GA: Inside/Out, a distinctive  look at the charming, eclectic, talented cast of characters who comprised the extended “Athens music scene in the mid-1980s” (including, among others, Jeremy Ayers, the Flat Duo Jets, Kilkenny Cats, Pylon, and R.E.M., who were filmed by James Herbert at the Seney-Stovall Chapel performing “Swan Swan H” and “All I Want to Do is Dream”)

Earlier this year, a sequel to the original 1987 film was released.  Red Turns Into Blue: Athens, Inside-Out 2 revisits the art, music and politics making up the fabric that helped turn the state of Georgia Blue. The cast this time includes some familiar faces from version one (Cindy Wilson of the B-52s, Vanessa Briscoe Hay of Pylon/Pylon Re-enactment Society come to mind) along with some new faces (Mayor Kelly Girtz, visionary filmmaker Bill Cody, photographer extraordinaire (and early R.E.M. staffer) Sandra-Lee Phipps, Patterson Hood of the Drive-By Truckers, Mariah Parker (AKA Linqua Franqa) and Kishi Bashi).

What’s the Athens scene look like now? Check it out on iTunes, ‘Red Turns Into Blue: Athens/Inside-Out 2’