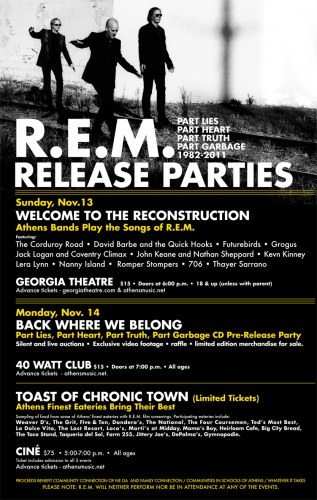 We’re just over a week away from the listening party extravaganzas which will be held here in Athens on November 13th and 14th to celebrate the release of the band’s hits retrospective R.E.M., Part Lies, Part Heart, Part Truth, Part Garbage, 1982-2011. These events (listed below) will be the last in a long succession of fundraisers dating back to the release of Automatic For the People in 1992.

We’re expecting the Part Lies festivities to be the biggest and best ever. There will be great bands, great food, as well as some great venues, and we hope you can join us. At last count, tickets were going very fast, so please act quickly if you are interested in attending. Ticket information may be found at athensmusic.net.

Night #1: WELCOME TO THE RECONSTRUCTION – Athens Bands Play the Songs of R.E.M.

Please note that in addition to being a generally fun and happy time for those in attendance, a major point of the release parties is to raise some much-needed funding for some important local Athens Charities: Community Connection of Northeast Georgia & Family Connection / Communities in Schools of Athens / Whatever It Takes. Even if you can’t attend, consider a donation to these worthy organization making a difference in the lives of many people in Athens every day. Thanks

Please note: R.E.M. will neither perform nor be in attendance at any of the events.