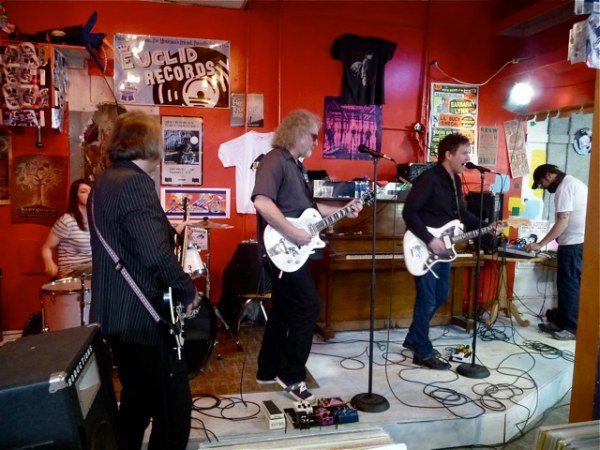 The Baseball Project is currently in Austin, Texas, for a series of shows (please see schedule below) this week at the SXSW Festival. After their recent stint rehearsing in Athens and performing at the 40 Watt this past Saturday night, Scott, Steve, Peter, and Linda hit the road for two shows in Baton Rouge and New Orleans. Steve Wynn, BP skipper and head statistician, checked in with us today from Austin where he filed the following report:

We spent a week in Athens before this current tour began, hanging out, rehearsing and mostly remembering how to play the songs that we recorded last year for our latest record, “High and Inside.” After all, due to our geographical separation and our “other bands” (did you know that Peter and Scott play in another band besides The Baseball Project? It’s true), we don’t get that many chances to play together. Well, after five days sequestered in R.E.M.’s rehearsal room, we were ready for our first show in Atlanta with chord changes and arrangements securely fastened and ready for public consumption.

So what does a well-rehearsed band do once they’ve got their act together? Why, they go and change all the arrangements and instrumentation as quickly as possible!

The reason and occasion for the temporary remake and remodel of the Baseball Project was our in-store performance at Wuxtry Records in Athens. I’m sure you all know that Peter worked behind the counter of the store even after R.E.M. was firmly entrenched in the hearts and minds of music fans worldwide (after all, the voracious music fan wanted to have first crack at the fine tunes that came through the door). And we all decided that it would be fun to play the show not as the rock combo that we rehearsed but as a banjo, mandolin and acoustic guitar folk combo. Somehow the old-timey sound that was conjured felt even more proper for songs about baseball—I thought we would all spontaneously grow waxed mustaches and turn to a faded sepia tone. Anyway, we played a short set of “Chin Music” and “Fair Weather Fans” (both from our new album) and, of course, “Take Me Out To the Ball Game.”

We enjoyed our unplugged combo so much that we brought it out again a few days later in New Orleans for a live performance on WWOZ, one of the best radio stations in the world. You can pick up the station online or on your favorite mobile device and it’s required listening if you’re a fan of any form of New Orleans music, R&B, jazz, blues or soul. I’ve listened to the station from as far away as Germany, grooving to the tunes while driving down the autobahn. It was certainly a pleasure and an honor for us to bring our acoustic, busking-ready combo to the station’s studio for an interview and another performance. When the radio show was over, acoustic instruments were packed and stashed and we went over to Euclid Records for a full-rocking set that was recorded for a future 7″ single.

But now that we’re enjoying our folk incarnation of the Baseball Project you just never know where we’re going to show up. Let’s just say that if you hear a version of “Take Me Out To The Ballgame” on your local street corner one day, I have a pretty good idea who it might be.

Be sure to catch the Baseball Project in action this week at SXSW. They’ll be appearing in the following fine venues: