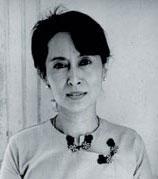 R.E.M, Pearl Jam, Coldplay, Travis, Paul McCartney, Sting, Peter Gabriel, U2 and others have contributed tracks to a benefit album for the world’s only imprisoned Nobel Peace Prize recipient, Aung San Suu Kyi, who is currently under house arrest in Burma. FOR THE LADY will be released on October 26th on Rhino Records. The executive producer on the album is Jack Healey and, in addition to R.E.M.’s “Drive,” recorded in Oslo (2003), the album features a song banned by Burma’s military regime, “Walk On,” which U2 dedicated to Aung San Suu Kyi on their last album and a song in Burmese written by a jailed student democracy activist. Like the leaders of former communist states, Burma’s military regime is fearful of the power of rock and roll, and singing a freedom song usually results in a minimum seven-year prison sentence.

Since 1988 Aung San Suu Kyi has led the National League for Democracy (NLD) in Burma campaigning for democracy and human rights against one of the world’s most brutal military regimes. Known to many as “Asia’s Nelson Mandela”, she is a symbol of hope for those struggling for freedom around the world, and received the Nobel Peace Prize for her nonviolent work to restore human rights to a country ravaged by military rule. She has spent the majority of the past 14 years placed under house arrest by Burma’s repressive junta, and thousands of her supporters have been arrested, tortured and killed. Yet she is more than an activist–she’s elected. She led her political party the National League for Democracy to an 82% victory in Burma’s last election–the military regime annulled the results.