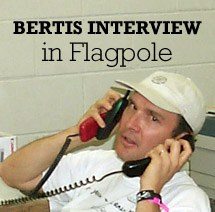 Bertis’ interview with Gordon Lamb of Flagpole, the Athens weekly magazine, is now available online. Read an excerpt below and visit flagpole.com for the entire interview:

Between 1997 and 2001, I was a temporary employee of R.E.M.’s home office. During that time I became friends with the band’s manager, Bertis Downs. For years since, I’ve wanted to interview him from a fan’s perspective, as opposed to that of a journalist. Since this week marks the 30th anniversary of the band’s very first public performance, it seemed like now was the time to do it. As always, Downs was gracious and forthcoming. Here are some highlights from our conversation.

Bertis Downs: Well, it was the early days of the band from the perspective of now. At the time they had been around for a few years at that point. I remember some early TV they did, they did a Letterman show [note: this happened three weeks before the “Livewire” broadcast], and they had just played [UGA’s] Legion Field the week before. We did a bunch of shows for “The Cutting Edge,” which was a documentary type of show on MTV [note: “The Cutting Edge” was produced by the band’s then-label, I.R.S. Records]. I wouldn’t say the band necessarily sought out TV, it wasn’t part of any master plan. We would always kind of evaluate things and see if they felt right. It was always the kind of thing where they went with their gut in terms of what made sense and what didn’t.

FP: Fables of the Reconstruction came out in 1985, and “Can’t Get There from Here” was the lead single, and it’s my first experience of having a band I like do a song that is unlike anything they’ve done before. It became, and remains, my favorite album by the band, but I remember reading interviews where the band said they hated it and Peter Buck flat out said, “Fables sucked.” That was my first experience of loving a record by a band but the band hating the record.

BD: I don’t know that they still hate that record. I can’t speak for Peter with regard to that particular interview. He was obviously in a fit of honesty at the time. On this last tour they played quite a few songs from Fables. Those are still songs they love to play. I’ll say this: the making of Fables was difficult. I think we’ve gotten smarter over the years about where we make records and when. And they don’t generally pick northern climates during wintertime. At that point in their career they’d only made two albums, and those were both in Charlotte, NC. So, we hired Joe Boyd [Nick Drake, Incredible String Band, et al.], a lovely guy who’s working with us on the reissue. He came to Athens, and we did some demos at Jim Hawkins’ studio on Boulevard. Then a month later we’re toward the end of winter, but March ain’t exactly spring in London. There we are in north London at an old church that had been converted to a studio. I think it was just a really difficult time for the guys. It was a tough experience, and I think the weather had something to do with it, and London getting dark really early, and I just don’t think it was a particularly pleasant experience making the record. That’s what I’ve heard them say in print and how I remember it from the time. I just think that record was a tough experience for them, and it colored their opinion, but I think they like all their records.

FP: The next big thing from my history as a fan is that it’s 1987, Document comes out, and fans tend to always have a sense of ownership toward a band they love. All of a sudden everyone in my high school owns Document. Then, the band signs to Warner Bros., Green comes out in 1988, and the band changes from playing 3—5,000 seat theaters to playing arenas. What were some of the difficulties the band encountered when making that change to playing bigger places?

BD: In the memory of it there’s always a little bit of a perspective shift, and I don’t remember it being as abrupt [as that]. They’d already played some arenas before that (on 1987’s Work Tour) so there had already been sort of a shift. It wasn’t like jumping off a cliff from being small to huge. They toured all the time, and it was always market-by-market. In some places you played smaller places because of the size of the town, the draw of the band and that’s what the promoter felt like was the right place to play. We always tried to play places that had some personality to them. We really don’t like playing bad buildings—¦ The big thing about ’89 was—¦ you know, in the early days they played all the time on the road, so those weren’t really considered tours. But starting in ’89, it was certainly the first time we ever did two legs in America, two legs in Europe, the far East, you know, all in one year. That was the big change. Just the wear and tear of going at it and being away from home and friends and family and being in constant travel-mode for an entire year.