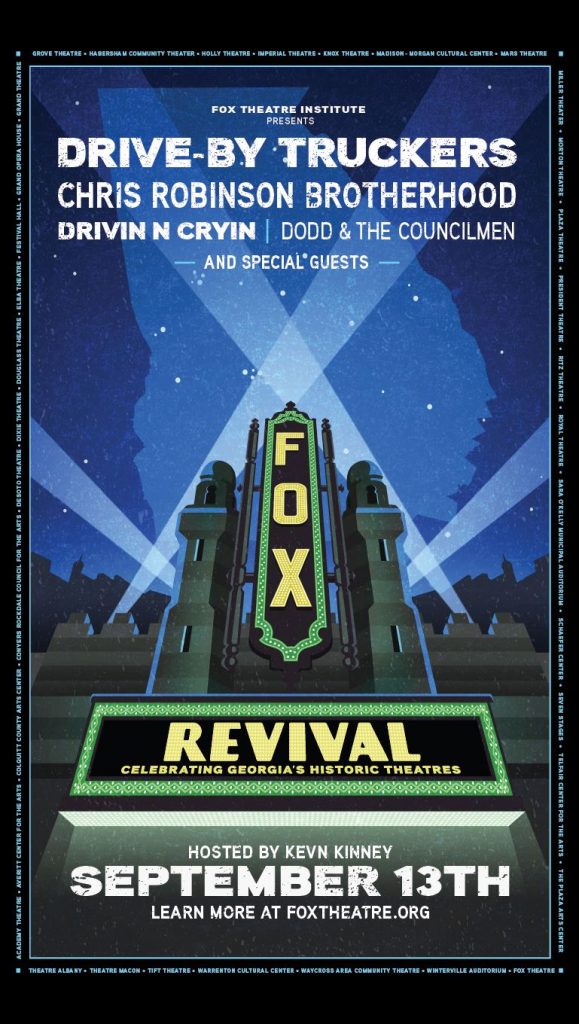 Dodd Ferrelle, mayor of the City of Winterville and frontman of Dodd & the Councilmen, wrote the following piece for us on his band’s upcoming show at the Fox Theatre on September 13th at 7:00 PM. for what promises to be an unforgettable night as the Fox Theatre Institutecelebrates Georgia’s historic theaters and FTI’s tenth year of preserving and supporting Georgia’s most significant historic resources. Dodd’s band features Bill Berry on drums, David Barbe on bass, and John Keane on guitar:

“It all started with a photo through the window on a dark, rainy day. I could not see in the window, but somehow my camera picked up the beauty lying untouched within. The Winterville Auditorium stole my heart that day in all of its lost, lonely and dust covered glory. The building had become a storage unit for the city’s forgotten wares after its closure many many years ago. The ceiling was falling in, seats were damaged and lost. The stage was buckling and half of the backstage floor was rotted and gone. There was no power or HVAC…Only dirt and spiders. That has all changed now thanks to this community and our friends at the Fox Theatre Institute. We are currently on our second grant from FTI and we hope to go for a third over the next year or so to fully finish the restoration we have started. The current grants have covered power, HVAC, a new roof, state of art sound and lights, a soundbooth and soundproof wall at the back of the room. All of that through our partnership with the Fox. The generosity of citizens and the vision of the Fox Theatre and Fox Theatre Institute has enabled a small city on a limited budget to rebuild, thus providing a cultural center that will reach out of the cities and far into the rural areas of North Georgia largely untouched by the Arts. And this partnership with FTI does not end with bricks and mortar. FTI will work with us on programming in the future to achieve our goals of education, enrichment and empowerment of our communities. So fast forward from that first photo in late 2015 to now. I have been asked by the Fox Theatre Institute to re-assemble my dream band from our first FTI Big Check Presentation Ceremony held last year in the Winterville Auditorium. The Councilmen featuring Bill Berry on drums, David Barbe on bass, John Keane on guitar and Adam Poulin on fiddle will join me on September 13th, 2019 in the Fabulous Fox Theatre as part of their Revival Concert. This means we will get a chance to help raise money for other Theatres/Auditoriums/Art houses in need throughout the state of Georgia and beyond. I will also be working with the Fox Theatre Institute throughout the year to help spread their message and mission of preservation, education and community. Joining us on the bill that night will be the Drive-By Truckers, Chris Robinson Brotherhood, and Drivin N Cryin as well as special guests. I cannot describe how thrilled I am to be able to share the stage at such an Historic Venue like the Fabulous Fox Theatre with heroes of mine who are even better human beings as we all work together to give back and help out other communities and historic venues in need!!”