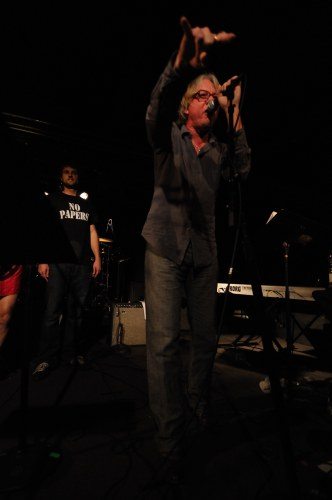 Brief Dispatch from Washington, DC, where Mike Mills and I are enjoying the Future of Music Coalition’s Tenth Annual Policy Summit. There have been highlights aplenty, old connections rekindled with people we only see once or so a year, along with new friends and faces as this thing seems to have a constant turnover as well as a consistent focus, lots of great workshop sessions on policy matters from copyright reversions to data and privacy concerns, and of course the constant themes of this and other conferences: musicians, compensation and adapting to the digital world as we go along. I’m on a panel today entitled River of Nickels. Yesterday afternoon, T-Bone Burnett and Greg Kot had a lively conversation with a keynote session that had the audience enthralled–T-Bone was in his inimitable, irreverent but totally serious mode. His take, boiled way down for postcard purposes, is that real art, including music, needs storage and display attributes well beyond what is offered in our current mp3 thinking of digital everything– T-Bone has a theory involving the return of analog in a big way. For more on the summit, check out FMC’s live webcast.

Mike got in for the Dear New Orleans benefit at the Black Cat last night, and the audience got to hear him play on a rollicking version of OHIO featuring the guys from Bonerama, Damien Kulash from OK GO as well as others from the all-star cast of the evening’s affairs which included Jenny Toomey, Tim Quirk, Franklin Bruno, Hank Shocklee, Jonny 5 of Flobots Wonderlick, Rebecca Gates, and Mariam Adam. All in all a great time to be in Washington and as usual I have learned a ton while also seeing good friends with mutual interests in all this stuff.

Other things I am thinking about this morning in our nation’s capitol: the new record’s wonderful, Peter’s Tired Pony project has a great feel to it and seeing them in NY was great fun, and last but not least, tonight R.E.M. (well not the band, but part of their canon) makes its Glee debut on the “Faith” episode when Losing My Religion is featured– Gleeks and novices alike should enjoy that. One of those songs one never tires of hearing, and it will be interesting to hear what the Glee “kids” do with it.

PS: If you’re interested in a thoughtful discussion surrounding social media, technology, and the net neutrality debate, I was on a panel in DC yesterday with Erin McKeown and Jonny 5 of Flobots called Facebook DC LIve:

PPS: Richard Cohen writes about “Ohio” forty years later in this poignant piece about the power of words in the Washington Post; and Eugene Robinson tackles the fallout in campaign finance resulting from the Supreme Court case Citizens United v. Federal Election Commission…