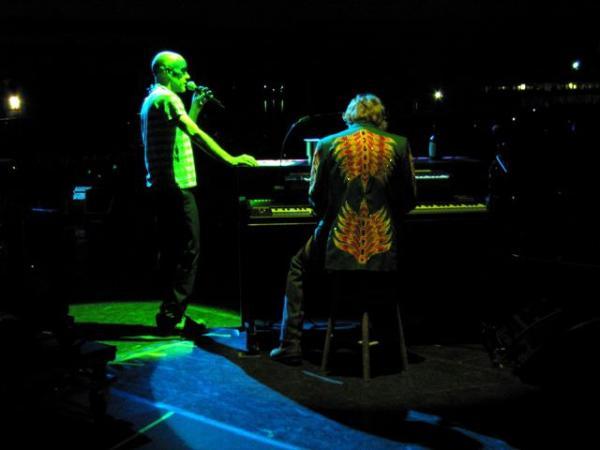 We have had quite a week. Here are some highlights, by the numbers:

R.E.M. flew up from Bologna this afternoon to close the annual Isle of Wight Festival; what a distinctive place this is…a special beauty reminiscent of some other magical places like Ojai, St Andrews, and Glastonbury; maybe it is because we are all tired from a 48 hour run of Rome, Imola and here off the southern coast of England…and it is Sunday, but even with big red trucks all around and the usual rudiments of a big rowdy festival, there is an almost spiritual calm about the place…looking out from the stage on an estuary, lots of trees, a carnival all lit up at the back of the grounds; one of the most perfect settings ever and after inspired sets by Embrace and Snow Patrol, R.E.M. delivered a rocking, rolling fast paced set. I donât remember the guys ever starting a show with I Took Your Name, Kenneth, These Days and The One I Love, but they did tonight and it sure was a rousing opening and the crowd, to my memory one of the best of the tour, responded in kind; to my reckoning, two of the best shows of the tour were this weekend in Rome and Isle of Wight.

So now, we head to Scotland and the Midlands for the two makeup shows from the February cancellations, Glasgow Green and Sheffield, before the big weekend festivities: Manchester, Loch Lomond, Dublin–we are keeping up our energy, the guys are thrilled to be back in England, and we are less than a month from finishing…all in all, great times in the life of R.E.M.

P.S.:
For more on the Isle of Wight Festival, including reviews and photos, please visit: