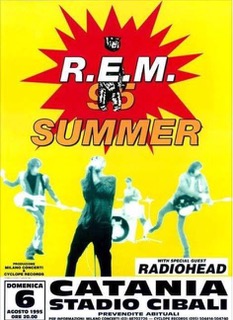 Catania in Sicily was one of the memorable shows of “bonus week“ at the very end of the summer 1995 tour in Europe (the others were Tel Aviv and (third time the charm–Prague). From the first song, “What’s the Frequency Kenneth” on, it was one of the best R.E.M. shows ever in Italy (and all their shows in Italy over the yearw were good ones).

Our dear friend, the late Francesco Virlinzi, the young “unofficial mayor“ of Catania, had helped arrange the show in all kinds of critical ways.  The crowd was amazing and the stadium, although not state of the art in the modern sense, had a soul and a vibe to match the moment.

We stayed in an old monastery in the nearby town of Taormina and that was worth the whole trip to the island in and of itself. One other random memory was the police escort afterwards, one of the strangest ever with the police motorcycles, lights a-flashing, behind our small motorcade of band vehicles. Classico. Magnifico!