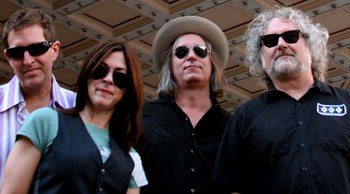 Tomorrow also marks the release of the first Broadside Ballad. To access a FREE download of the song, go to ESPN.COM.

THE INSIDE SCOOP ON THE BROADSIDE BALLADS:

Having firmly established the previously unknown and unlikely marriage of Rock and Roll and baseball, the indie-rock ‘supergroup’ known as The Baseball Project are now set to wed topical folk rock with sports journalism. Presenting BROADSIDE BALLADS, big league style: Phil Ochs steps up to the plate while Blind Boy Grunt twirls bats impatiently on deck. Ring Lardner pounds his typewriter keys, and Peter Gammons plugs in his Strat. Yes, it looks like Scott McCaughey, Steve Wynn, Peter Buck and Linda Pitmon will become a free-swinging musical blogging band this year when they release a series of download singles throughout the 2010 season. The band will be providing tuneful commentary on baseball events big and small, recording them in magical bi-coastal fashion (Linda and Steve in New York City, Scott and Peter in Portland and Seattle, respectively) and putting them up online while the ink is still wet. Best of all, the songs will be absolutely free, just a way for the band to thank fans for the overwhelming support of their debut album “Volume One: Frozen Ropes and Dying Quails” while working on the Volume Two, due early in 2011.

The first track to be released is an optimistic, buoyant number called “All Future and No Past.” Says Scott: “I’d been reading all the pre-season reports and realizing that this is the time of year when every team has high hopes, no matter how unrealistic. Then I stumbled upon a saying from the great Indians player/manager Lou Boudreau: ‘On opening day, the world is all future and no past’. And for me that really sums up the beautiful feeling that comes with spring training each year.” The song was written, recorded and mixed in Portland and New York City, all in the space of about a week, setting a template for regular dispatches throughout the season.

And when will the next song come down the pike? Well, keep your eyes on the band’s various websites and other outlets as well as the sports pages. When something glorious, stupid, heroic or hilarious happens in the baseball world this year it’s very likely you’ll be hearing more about it from The Baseball Project. Sportswriting has rarely sounded so good.