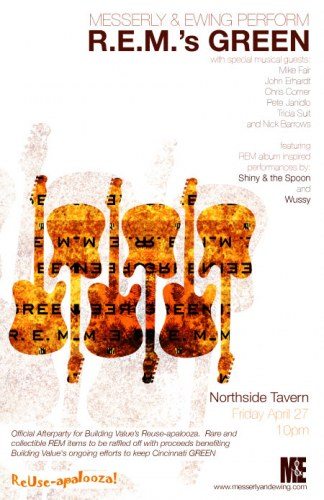 Cincinnati’s Messerly & Ewing are set to perform R.E.M.’s album GREEN in its entirety with guests on April 27 at Northside Tavern.

The album performance is a tie in to Building Value’s green mission in Cincinnati, both as a nonprofit social enterprise that salvages reusable materials for sale to the public, and through its green Ã¢â¬Ëdeconstruction’ services that save materials from accumulating in local landfills. Collectibles and merchandise from R.E.M. were donated for both ReUse-apalooza and the after party thanks to a good friend of M&E who has worked in the R.E.M. home office for 19 years. Some items will be available during a raffle at the after party; others will be offered during ReUse-apalooza’s silent auction that takes place earlier that evening, including a rare concert poster announcing the Green tour in Spain signed by Bill, Peter, Mike and Michael.

Find out more about the band and the cause at their Facebook page.

You can watch a performance here.