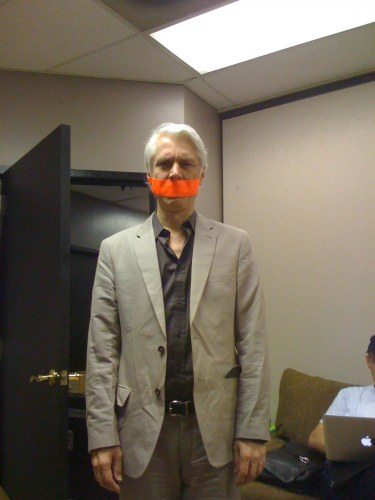 R.E.M.’s drummer, Bill Rieflin, and HQ’s David Bell recently had what one might loosely term a “conversation” the day of the Atlanta show. As you’ll see from the photo, Bill’s mouth was covered with a strip of orange tape, for some strange reason, so the admittedly “amatuerish” interview ensued as best it could with the aid of modern devices of technology as the protagonists sat side-by-side on the couch wielding their iPhones and MacBooks:

HQ: Tonight’s show is in Atlanta, the last stop on the North American tour; how have things evolved from the Langerdo festival way back when?

BR: Langerado seem so long ago, like it was a different tour. That show was a bit rough-and-ready, but furious. We definitely have our sea legs now. We’re really good and, best of all, the shows continue to get better and better. So that’s a good evolution.

HQ: Your playing on accelerate and the tour has been widely hailed and praised for both its intensity and its precision. Is there anything about accelerate, the album, that lends itself to a “bill rieflin” signature style?

BR: ummmmmmm…. i’m not sure if i’m the best one to elaborate on my so-called “signature style,” but, i hope this means that i play the right thing at the right time. for ‘around the sun,’ this meant one thing. for ‘accelerate’ this means another. it’s undeniably fun to play drums with intensity and power, as on ‘accelerate.’ for sure this is what the music needs to make it lift off. but the drumming on ‘electron blue’ is pretty cool too.

HQ: When you play pre-around the sun and pre-accelerate tunes, what’s the mindset? Be as honest to the original as possible or is their some wiggle room for you to improvise…

BR: when i began preparing for the greatest hits tour 5 years ago, we would obviously be playing a lot of old material. it was important to me that when we played, it sounded like r.e.m. too frequently, when a band gets a new person, it never quite sounds right afterward. so, i wanted to do what i could to make r.e.m. sound like r.e.m. essentially, this meant that i needed to be able to channel bill berry. i immersed myself in the records, listening to them over and over. i not only needed to get the notes right, but i wanted to discover what made bill tick, to learn what i could about why he played what he did, to know his feel. feel is subtle and complex. it’s not only up to the drummer, but rather, it’s the sound of how everyone integrates together.

HQ: Do you have any personal favorites you look forward to playing every night?

BR: ‘be-bop-a-lula’ is one of my faves. ‘song sung blue’ is another one. do you mean the shows? ah. let’s see….. i love ‘ignoreland.’ each time we play this has the same life and magic as the first time we played it. probably 3 weeks ago. the new arrangement of ‘ive been high’ is really nice. ‘harborcoat’ is fun if only because i get to laugh as mike struggles with his really fast bass part. the set changes every night so there are always surprises that keep things fresh.

HQ: Which songs are the most challenging for you?

BR: when a new song is introduced into the repertoire, it can take me a while before i figure out how to play it. not just the mechanics, but the feel and the spirt of a piece. ‘time after time’ was like that although i think i’ve got a handle on it now. ‘auctioneer’ is still a little puzzling. but at the risk of sounding, well, you know, we’ve all been playing really well. i include myself in this.

HQ: You also drum with the Venus 3, the minus 5, and have your own project slow music; how does the playing vary from band to band, project to project? Do you play guitar in slow music?

BR: yow. the very short answer is that these are all very different adventures and each require something different from me. a group is a dynamic organism – changing just one part can radically alter how things function and work together. for instance, even though there is only one personnel difference from the M5 to the V3, they are significantly different creatures and what i do in each is different. this holds, more or less, for everything i do. as for slow music, i was playing keys, synths, and electronic percussion.

HQ: You get a few days off before the European tour starts; any plans? Is it hard to turn off the momentum and turn it back on on command?

BR: my plan is to be at home – pay bills, catch up on bookkeeping, that sort of thing. in order to stay in shape i’ll be practicing during the break. i have some nice calluses on my hands and i’d like to keep them, thank you. oh! and i’ll probably watch some television. scintillating stuff, huh?

BR: for the first time, i brought an i-pod with me and something to listen to music to in my room. i spent hours and days loading it up will all my favorite records. but in boston i bought a marvin gaye greatest hits cd. it’s the only thing i listen to. i’m crazy about the song ‘i want you.’ it’s one of the greatest things ever. i totally love it. when i get like this about a piece of music i’ll listen to it over and over. in fact, i want to hear it right now. as for reading, i admit that i find reading a more difficult proposition on tour. i’ve been lugging around a few books but haven’t yet cracked them. one is oliver sacks’s ‘musicophilia.’ i’m halfway through it. but i was halfway through it a month ago.