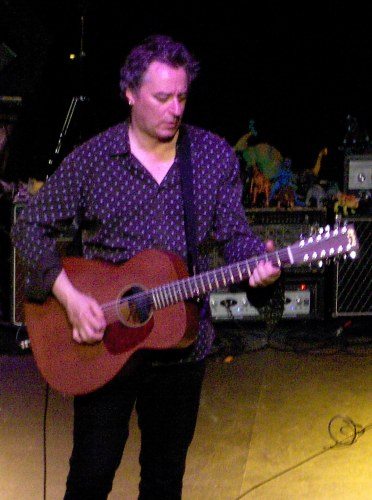 Day three of the Dublin working rehearsals witnessed a powerful performance from the band who once again “tried out” eleven new songs as well as several songs from Fables of the Reconstruction and Reckoning. The new songs which include such WORKING titles as “Horse To Water,” “Staring Down the Barrel of the Middle Distance,” “Until the Day is Done,” and “Houston” sound fantastic and confident as if the guys had been playing them for a long time now. The older material consisted of some songs the band, in Michael’s words, hadn’t thought about in twenty years: “Feeling Gravitys Pull,” “1,000,000,” “Auctioneer,” and “Kohoutek.” The band also played “Second Guessing” “Driver 8” (with Scott McCaughey looking like Bob Dylan on harmonica) and “So. Central Rain (I’m Sorry)” from the back catalog as well as “new” song “I’m Gonna DJ” which Michael said will likely appear on the next record.

Support was from Dublin’s Cathy Davey whose voice was pretty and ethereal and kind of reminded some of us of Harriet Wheeler from The Sundays–very impressive.

Tonight’s show at the Olympia will feature support from Viarosa and Robyn Hitchcock. Stay tuned for a full report and photos.