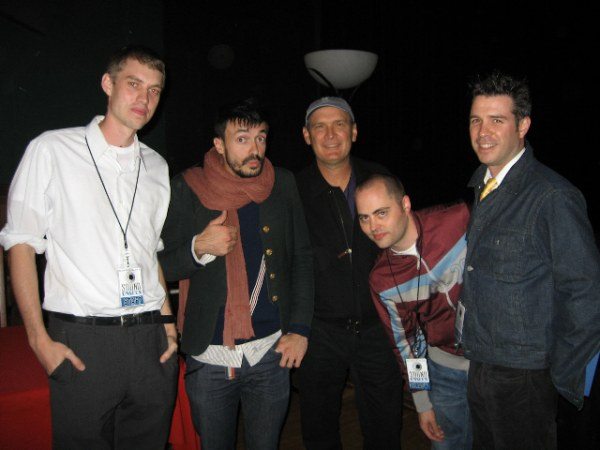 It’s been a fast and furious week in R.E.M. land beginning with the excellent Minus 5/Baseball Project/Steve Wynn outing at the 40 Watt on Monday. It was truly special getting to witness Peter, Mike, and Bill on the same stage once again and fun to see so many familiar faces at the Watt. Last night was the conclusion of the Minus 5 tour as Peter, Scott, Steve and Linda played their final show in Austin. Next up for Peter: a brief tour with Robyn Hitchcock and the Venus 3 and then into the studio with R.E.M. in November where the guys will begin work on their next record.

On Tuesday, I was pleased to be a part of opening night at the Sound Unseen Festival in Minneapolis where This Is Not A Show had its world premiere. Vincent Moon was as charming and insightful as ever in his responses to the questions from the audience after the film. It was great spending time with Vincent who has been such a big part of R.E.M.-related matters over the last two to three years. Big thanks to Steve Holmgren and the entire Sound Unseen team. I really do hope everyone gets a chance to see the film somewhere at some point on the big screen. Next up for This Is Not A Show… Seattle’s Northwest Film Forum, October 23-25, Cinema Purgatorio on October 27th at the Kraine Theatre in New York City, In-Edit Film Festival in Barcelona on October 30th, and the Dallas Video Festival on November 5th. There are other screenings in the offing, so we’ll report those as soon as they’re confirmed.

If you haven’t visited remdublin.com this week, stop by and have a listen to the audio for So. Central Rain. Just as the rest of the tracks we’ve posted, it’s great stuff and a fine example of what’s to come on October 26th. Speaking of which, it’s hard to believe that R.E.M. Live At The Olympia will be out in under four weeks. Some early reviews of the Live CD are already beginning to appear…. And last but not least on the subject of Dublin, be sure to check out Dave Fanning’s excellent interview with the band (click on the Dave banner on the right).

As reported here late last week, Mike and I will be in Washington, DC, for the Future of Music Coalition’s Policy Summit, October 4th-6th. Mike will do an interview with Senator Al Franken following the Senator’s keynote address. I will be on a digital music panel. For more on the summit, please click here.

One to watch out for: Our friend Laura Levine’s iconic photo of R.E.M. at Walter’s BBQ (circa Reckoning) will be part of the Brooklyn Museum‘s upcoming exhibition: “Who Shot Rock and Roll.” Laura recently did an interview in which she discussed the Walter’s photo and working with R.E.M. which you can read about here.

Finally, here’s a nice article on our friend Chris O’Riley whose record of solo piano music, Out Of My Hands, includes a great interpretation of “World Leader Pretend” among other interpretations of songs by contemporaries of R.E.M.