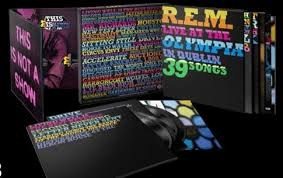 Postcard with some thoughts on Record Store Day and UNPLUGGED

Yesterday was a little like old times, accompanying Mike Mills to Bull Moose Records in Portland, Maine, where he did an in-store and got to meet lots of happy R.E.M. fans out for the release of UNPLUGGED, which vinylly saw the light of day, both the 1991 and 2001 complete sessions. The records are loaded with great songs, some classics and some under-performed over the years, and those MTV concerts really captured the band at two very different points in their career. Yesterday was a fun day and as longtime admirers of and occasional participants in the RSD festivities, it was neat to get to visit the belly of the beast, as it were, since our host was Chris Brown of Bull Moose, the guy who dreamed up the concept of a day to celebrate and promote record stores a mere 7 years ago. Now that it has grown into a worldwide spectacle, much of the original energy and drive for the whole thing remains there in Maine in the coolest big thriving record (+) store you will likely see. So that was nice.

We knew that UNPLUGGED would be a limited edition– 2,500 were pressed and while that is a relatively small number, it was an honest estimate by people who sell (or try to sell) albums every day– perhaps the crystal ball was a little “off” on this one. For that I apologize and assure you it was no one’s intent or desire to frustrate people– I hope most people understand that. Just like none of us enjoyed the fact that tickets were scalped on R.E.M. tours, the E-bay phenomenon on this and other rare records is a drag.

Let me add two other aspects that might provide some perspective: R.E.M.’s UNPLUGGED set is being released a month from today–May 20th, on CD and iTunes and other digital outlets. Same music, cool packaging, and plenty of copies in the popular digital formats of recent decades! So there’s that. And if it is R.E.M.vinyl you crave, and classic songs from all phases of the band’s career, you can probably still find one of the best underknown and underappreciated gems of the entire R.E.M. canon: LIVE AT THE OLYMPIA. It is 4 LPs (or 2 CDs) of all the songs recorded the first week of July, 2007– Jacknife Lee and team made the recordings into a powerful live record and for whatever reason that one never got much notice– so check it out if you haven’t already. Meanwhile, enjoy MTV UNPLUGGED whether you got it yesterday or will next month or on a web foray whenever that happens– it is good music and fun to share with the world.

p.s. here are some relevant photos:

Photo 2: Now on vinyl, coming soon on CD and iTunes

Photo 3: meanwhile this is an awesome record that relatively few people have even heard