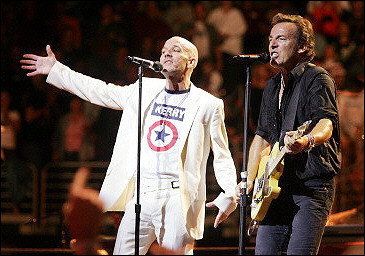 10/3/20: the 16th anniversary of the Vote For Change stop in Detroit at Cobo Arena on October 3, 2004 with Bruce Springsteen, Bright Eyes, and John Fogerty. Highlights were numerous that night, but for the band, being joined onstage by the Boss for “Bad Day” and “Man On The Moon,” Peter and Mike accompanying Bruce and the E Street Band on “Born To Run,” and Michael singing “Because The Night” were special and hard to top. Like ever…… today by phone, Bertis remembered the very special finale that night, Patti Smith’s anthem, “People Have the Power,” as it also included the Dixie Chicks (now The Chicks — along with Springsteen, R.E.M., John Fogerty, and Bright Eyes). This was in the wake of The Chicks honesty that had made them famous… and they’d just arrived to Cobo from their own Vote For Change show at the Fox Theater. It was a rocking great time that night in Detroit Rock City….now 5 elections ago.
Read more at https://backstreets.com/setlists2004.html
photo from: coveredbybrucespringsteen.com