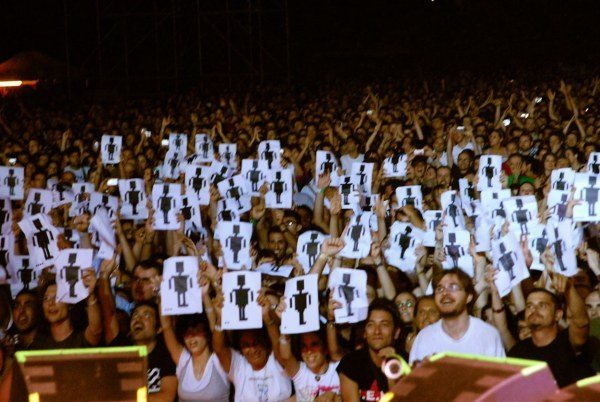 Well, the break’s been nice here in early August, but only a few days to go until R.E.M. is back in action: the first shows are the Frequency Festival in Salzburg and Sziget in Budapest, followed rapidly by Prague, always a favorite, some scenic dates in Germany and then, finally, the UK dates in Manchester, Cardiff, Southampton and London at Twickenham. . . we can’t wait. And you have probably noticed the recent announcement of the band’s return to Mexico City, in the stunning Auditorio Nacional. We are anxious to announce more dates, and will soon, even further south of our border. . . working on final details now, but stay tuned to this space for the next set of dates this coming fall.

Something for the Weekend is the best part of the SUN newspaper, a popular read in the UK. Today they do up a Big Feature on R.E.M. and more specifically, Peter Buck’s Musical Brain-some great reading – and a fun contest too. So check it out and get ready for the shows upcoming (for more news from the Sun, including a review of the Baseball Project’s new record and info on an R.E.M. contest, click here).

The Olympics start today and our friends at the Save Darfur Coalition asked for some alternative programming to help make a point about some other things going on in the world. Check out their site and watch some pretty riveting R.E.M. performance footage (as well as other more specific programming.)

While on public interest topics, here are a couple from back on the ranch in Athens:

-A public meeting on proposed NBAF site for our suburbs

– And an alternative take

p.s. One more potential item of interest, especially in this Back To School time everywhere: Bill O’Reilly’s book for kids– message: Don’t Be A Bully! Yeah!