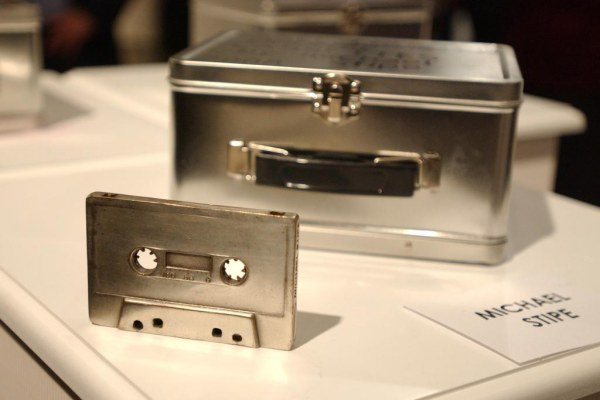 Although it seems just like yesterday that the band wrapped up their world tour in Mexico City on November 18th, it’s actually been almost a month since the grand finale took place at the Estadio Nacional. Hard to believe, and while things have certainly begun to calm down around here, that’s not to say that there aren’t still a few things in the works. So, here’s a quick roundup of reviews, projects, and other odds and ends going on in the world of R.E.M. as we lead into the holiday season:

ACCELERATE is receiving well-deserved recognition in some of the Top Album of the Year polls that have started to come out this month. The Times Online rates it #9 in their 100 Best records of 2008 while ACCELERATE clocks in at #26 in Spin‘s 40 Best Albums of 2008; and this is a nice shout-out for the album in the Corpus Christi Caller…

As reported here yesterday, both Mike and Michael designed lunchboxes for the third annual Foodbank For New York City’s Lunchbox Auction which got underway last night. Unfortunately, the report was only partially accurate: Michael actually designed THREE lunchboxes, not simply one, and one of them was auctioned at the kick-off party at Milk in Chelsea last night for $20,000, helping to raise much-needed funds for the Food Bank’s projects. (You can read about the kick-off event here in the Gothamist).

Michael’s other two lunchboxes, along with Mike’s and lunchboxes designed by various celebrities, musicians, and personalities are currently up for auction HERE.

Please click on the following links to go directly to Mike and MIchael’s lunchboxes:

And, if you’re looking for a special gift for someone this holiday season, you might even think about placing a bid!

Here’s a video for the Food Bank For New York City featuring a brief appearance by Michael:

Our good friend Ken Stringfellow is staying busy, per usual, with several worthy side projects according to this article in the Jerusalem Post.

We’re excited to hear that the “Indie Superman” has kept his cape in working order and continues to bring his tuneful sounds to the deserving people. Learn more about his vibe at kenstringfellow.com…

ps: Since so much of this past year has been consumed with politics, have a look at this article which focuses on it being the Season of Giving. Surely we’ve all seen someone out there who could use our help, so look around, and do what you can to make things a little nicer for someone in need.