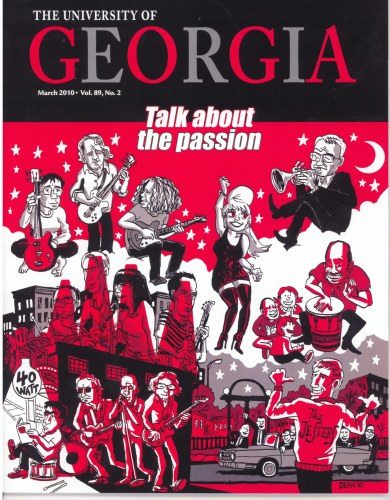 The March 2010 issue of Georgia Magazine has an in-depth article on the Athens music scene. Read an excerpt from the article, Talk About the Passion, below and click on the link to read the full article:

Here’s the short version: the Athens music scene began April 5, 1980, when an unknown band—that later took the name R.E.M.—played their first gig at a friend’s birthday party. The bash took place at an old church on Oconee Street, where several of the band members lived along with Kathleen O’Brien, the birthday girl. They lived in the renovated front space, and to get to the former sanctuary in the back where they played, they went through O’Brien’s closet. The band played seven or eight original songs, and the rest were covers like “God Save the Queen,” “I’m Not Your Stepping Stone” and “Gloria.” Night life in Athens was practically nonexistent then, so 300 people showed up for free beer and three unknown bands (Men in Trees and The Side Effects also played). “People came because it was a happening, because it was a party,” R.E.M. bassist Mike Mills says. “Who was playing didn’t matter.”