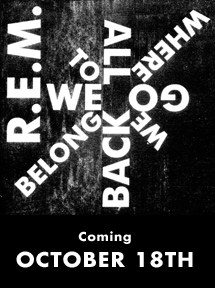 Just below, we’ve added a few more things that we missed earlier in the week to our ongoing coverage of R.E.M. remembrances following the news of the band’s split last week:

On Monday, October 24th, Reprise Records will release a three-DVD set and a two-CD collection featuring live performances from many of the biggest names in music who have performed at the beloved Annual Bridge School Benefit Concerts over the past 25 years.

In addition to R.E.M., who played at the concert in 1998 and 2001, the collection includes performances by such musical luminaries as Paul McCartney, Radiohead, Pearl Jam, Patti Smith, Bob Dylan, and The Who.

All proceeds from the package go to programs for The Bridge School, a non-profit, innovative organization educating children with severe speech and physical impairments through the use of augmentative and alternative communication systems and assistive technology. Bridge School co-founder Pegi Young and Executive Director Dr. Vicki Casella explain: “The success of The Bridge School has been ensured over these many years through the extraordinary generosity of performers, artists and musicians. The funds raised by this benefit have allowed us to have a positive impact on children, families and professionals throughout the world.”

View the Bridge School Anniversary Collectoin trailer and learn more about the package and concerts here.