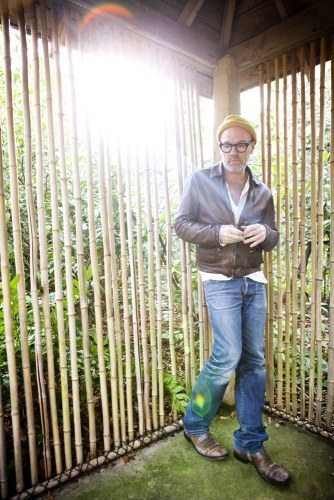 Athens Potluck is a conceptual photography project about the Athens music scene, which I’ve been working on for the past few years. What makes this project unique is that the Athens musicians are driving the content. I chose the first musician to be photographed, Laura Carter of the Orange Twin Collective; she then chose Will Hart of Olivia Tremor Control, who chose Julian Koster of Neutral Milk Hotel, and so on. Andrew Rieger of Elf Power chose Michael Stipe, and Michael chose his “musical hero,” Andy LeMaster of Now It’s Overhead and Bright Eyes. The project is so much like Athens—you never know where each day, or any random connection, might take you. And with more than 600 touring bands based here, I knew it would be impossible for me to decide who should go into the book—so the potluck concept, for me, really shows the magic of Athens. I photographed each musician in his or her home or studio, and I let them show me what they wanted me to shoot, basically a few hours in the life of each artist.

I photographed Michael Stipe, just days after R.E.M. announced that they were “calling it a day” as a band. I’ve known Michael for years, but I’d never had the chance to make a serious portrait of him. When I met him that day, it really felt like I was seeing a new person. I photographed his artwork– sculptural objects he’s created over the last several years– his Bronze Cameras and Boxes of Vonegut. Since Michael was literally just embarking on his new life outside of R.E.M., it felt like I was making a portrait, not of the front man of a major rock band, but instead, a portrait of Michael Stipe, the Artist.

The show is on view at Atlanta’s Hartsfield-Jackson International Airport now through Feb 2015 in the airport’s main Atrium Gallery.

Follow Jason’s daily photo posts from the series at