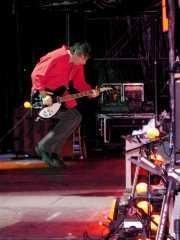 We just received a very nice email from our old friend and colleague Klaus Hoffman in Vienna:

“I saw Paul Weller at Vienna State Opera yesterday which reminded me of how quickly time flies:

Today, July 8, 2015, marks the 16th(!) anniversary of R.E.M.’s performance at this very venue with Patti Smith supporting. What an excellent show it was—I remember a rare performance of “How The West Was Won,” an excellent “Country Feedback,” blistering versions of “Lotus” and “Walk Unafraid” and a heartbreakingly beautiful “Sweetness Follows.”

And then, as you know, the band were to return to Vienna exactly 4 years later on July 8, 2003, to perform in front of Schoenbrunn Castle, a show running late and ending with the first performance of “Permanent Vacation” in years. Sweet, sweet memories.”

Klaus is too modest to add that it was he himself who helped arrange the band’s appearance at the Opera House, not exactly a place rock bands “waltz” into. And the 2003 show was the one most threatened due to “the trucks being late,” and if it wasn’t for the good graces of the city officials to keep the tramlines running later than usual, we never would have been able to get that show in.

Great memories indeed Klaus—thanks. Long summers in Europe were a fun part of all those old touring times.