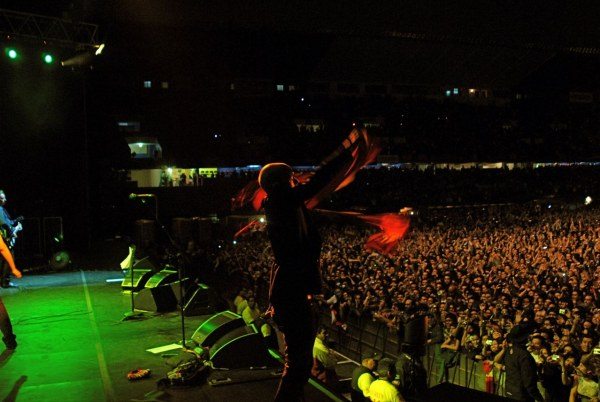 35,000 strong turned out in Lima last night for R.E.M.’s maiden performance in the Peruvian capital at the Lima Hot Festival, which also included superb sets by Travis, Cementerio Club, and Turbopotomas. The band now heads to Venezuela for the Musica Movistar Festival on Sunday in Caracas. Travis, Sonic, and Los Paranoias round out the bill.

Click on the photos below from the Lima Hot Festival and check out the following links (with translation provided) from last night’s show:

A NIGHT FOR HISTORY BOOKS

The legendary band played for the first time in Peru as part of the Lima Hot Festival.

American band REM performed last night in front of 35,000 pp that arrived at the Estadio Nacional surroundings early in the afternoon.

The band from Georgia, the main act at LHF, displayed all their creativity energy around 10 pm with a big lights set up and a ‘zero complain’ set list.

As achieving all the audience’s expectation, Michael Stipe’s fronted band played the classic hits “Losing My Religion”, “Everybody Hurts”, “It’s the End of the World As We Know It (And I Feel Fine)”, etc; which end up to steal the admiring of thousands of fans.

Due this, the attendees were able to walk through along with those rock alternative pioneers with a 28 year old career making a fine selection of memorable albums such as “Document” (1987), “Out of Time” (1991) and “Automatic for the People” (1992).

The band is actually in between a southamerican tour to promote their most recent album, ‘Accelerate’. Before arriving Lima, they played in Argentina and Chile.