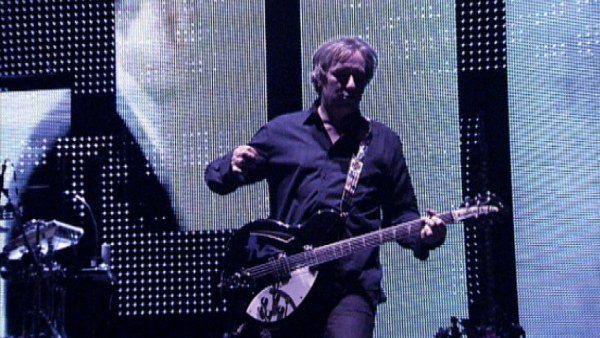 Blue Leach, R.E.M.’s mega-talented tour video director (you’ve seen the screens!), has directed a VIDEO for Man-Sized Wreath, the hard-charging third single from ACCELERATE. The live video was produced by Emer Patten of Splinter Films, longtime R.E.M. collaborator, who, among other things, previously worked with the band on 2007’s R.E.M. Live.

Read Blue Leach’s comments on the video below:

I shot a live version of Man Sized Wreath in Lyon, France during the early part of the European tour. As you know, I always run a chopped up version of Crush’s superb film on the screens. I wanted this to be in the live version too, hence the plentiful shots that have the screens in the background. I love the lithographic “WOWS” that I use in the screen show too so I threw in some of those for good measure. The overall colour grade Michael and I agreed should kind of black and blue which I feel takes you to a good place mood-wise and suits both song and performance.

Considering I shot it over one night and with only our show cameras I’m very proud of how it turned out. That it was offlined, conformed, graded and onlined in 2 or 3 days I think deserves kudos and credit to all involved.

I’m currently in Athens, Greece programming screens and some signature looks for REM’s MTV Greece headline appearance on Sunday. Its going to look great, tune in if you can.