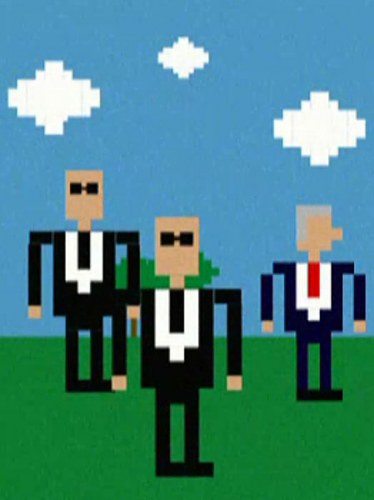 If you’ve seen one of the band’s shows during their current tour, then you’ve experienced the amazing visual component of the show brought to you by the stunning video screens which accompany the music. Last night at their sold-out concert in New York City at Madison Square Garden, the band premiered rough footage from the forthcoming clip for Man-Sized Wreath. The piece is being directed by Toronto’s CRUSH, who most recently directed the video for R.E.M.’s second single Hollow Man (currently streaming on remhq.com). (Ed. note: Since this story was originally posted, the clip’s debut has gotten a lot of coverage in the media–please click here to read an article including an interview with Michael). The visionary director responsible for coordinating the screens on stage, Blue Leach, the band’s videographer (see R.E.M. Live), wrote the following post to shed further light on how film, including the footage for Man-Sized Wreath, is being incorporated into the band’s live show:

During the last 2005 tour I brought in the promos for Kenneth and Leaving New York to add to the screen show. On my show console, I cut into and out of these films with my live cameras. I then add digital colour and physical energy (through direction) that then dovetails with the theme of the films so there is a confluence of impact between film/pre-recorded and live action. On the Accelerate tour Iâm doing the same with the very fabulous Supernatural and Hollowman films. Their addition to the screen show and the show overall is dynamic. However, the biggest coup within this realm of our screen show for this tour will be the debuting of edited footage from the as yet unaired and incomplete Man-Sized Wreath film from the folks from CRUSH.

We hope to do this at Madison Square Garden on June 19th. Itâll be a first on many counts. Cannot wait.

Be sure to look for the show coming to your area soon!