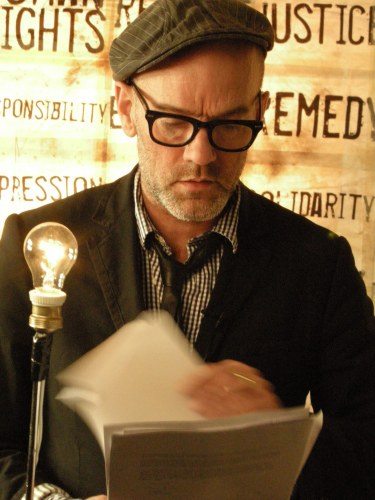 While in Ireland for the Oxegen Festival this past weekend, Michael taped a PSA for Amnesty International which is in the midst of marking the 60th Anniversary of the Universal Declaration of Human Rights with their “Small Places Tour.” The Small Places Tour, according to Amnesty’s Chairman For Art Bill Shipsey, kicks off formally on September 10th. We hope to have the PSA available on remhq.com in the very near future, so please stay tuned. In the meantime, please visit Amnesty International’s Small Places Tour myspace page for more information.

About the Small Faces Tour:

Inspired by Eleanor Rooseveltâs call for “concerted citizen action” in her famous âsmall placesâ speech in 1958, musicians and fans will raise their voices in song and action in venues, cities, towns, communities, neighborhoods and workplaces. Through hundreds of concerts held around the world, AI intends to draw attention to urgent human rights concerns, recruit thousands of new human rights activists and, hopefully, raise much needed funds for Amnesty campaigns. Amnestyâs 2008 priority campaigns include working to stop violence against women, stopping torture, ending the killing in Darfur, controlling small arms, demanding the closure of GuantÃ¡namo, challenging Chinaâs human rights record including its actions in Tibet and working for the release of Aung San Suu Kyi and other political prisoners in Burma.