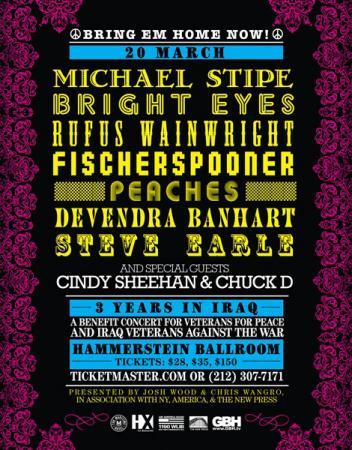 Michael will perform at the âBring âEm Home Nowâ Concert For Peace on March 20th at the Hammerstein Ballroom in New York City. The concert coincides with the three-year anniversary of the U.S. invasion of Iraq in 2003. Also on the bill are Rufus Wainwright, Bright Eyes, Fischerspooner, Peaches, Devendra Barnhart, Steve Earle, and special guests âPeace Momâ Cindy Sheehan and Chuck D. Proceeds will be donated to Veterans for Peace and Iraq Veterans Against the War whose principal missions are saving lives and ending the violence in Iraq by an immediate withdrawal of all occupying forces.