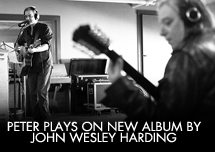 Michael continues on in Austin tonight (following on the heels of his Q & A session Wednesday night for the Collapse Into Now Film Project at SXSW) where he is participating in a fundraiser for Japan organized by Taylor Hanson and other kindred spirits at SXSW. The event, which will take place Saturday, is a live streaming telethon at SXSW4japan.org. According to Michael, the telethon will run for 12 hours and will raise money for the American Red Cross’ recovery and humanitarian efforts in Japan. “I’m thrilled to be able to participate in this event,” Michael said.

The event will feature live musical performances throughout the 12 hour coverage as well as some taped pieces, including several which Michael has been filming tonight. Michael also conducted a short interview/segment with Taylor Hanson which will air during the telethon.

We would like to encourage everyone to tune in and please offer your support by making a donation. You can make a contribution and find out more about SXSW’s efforts at SXSW4japan.org