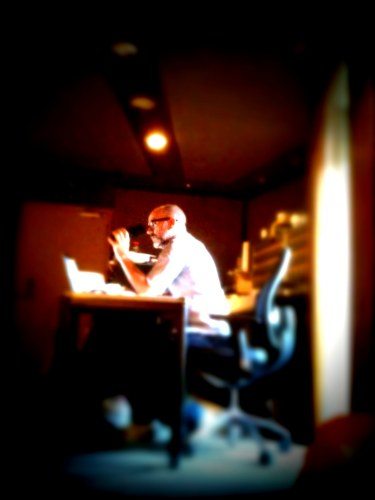 The band has completed the third phase of recording their next record at Hansa Studio in Berlin with Jacknife Lee and will now set about mixing it at some point this Fall. Though we don’t have a definitive date, all signs are pointing towards a Spring 2011 release of R.E.M.’s follow-up to Accelerate. In an interview on BBC Breakfast this morning in which he discussed the Tired Pony record along with fellow TP bandmate Gary Lightbody, Peter spoke briefly about the new R.E.M. record, telling the interviewers he’s “very excited about” the new R.E.M. material (click HERE to watch the BBC interview), noting that one song in particular was inspired by his 8-day stint in Portland recording The Place We Ran From (see post below for more Tired Pony news)…

FABLES OF THE RECONSTRUCTION OUT NOW!

The expanded 25th Anniversary edition of the band’s third album Fables Of The Reconstruction was released today in Europe (the album is out tomorrow in the USA). The album, originally released in 1985, is available both digitally and in a 2-CD format. It features the digitally remastered original album, plus 14 previously-unreleased demo recordings. The commemorative release also adds new liner notes by Peter with the 2-CD package presented in a lift-top box with a poster and four postcards. “The Athens Demos,” as the band dubbed them, comprise the new edition’s second disc of 14 previously unreleased recordings, including drafts of Fables11 songs and three additional tracks that didn’t make the album. The three non-album demos include two early versions of songs that were later revisited by the band and recorded for other releases; one track, “Throw Those Trolls Away,” makes its release debut on this new edition. The remastered original album is also available on 180-gram vinyl.

Order in the USA

Order in the U.K.

In celebration of the release, we have dusted off a couple of period reviews of Fables written by Anthony DeCurtis (Record) and Parke Puterbaugh (Rolling Stone) in 1985. Click on the links (PDF files) below to read the interviews by Anthony and Parke. In addition, thanks to Anthony, we are able to present a never-before-heard audio interview he conducted with Peter for the Record magazine article. The clip is a little fuzzy at times but is well worth a listen.

Listen to Anthony DeCurtis’ interview with Peter Buck for Record

In other Fables news, be sure to listen to 92.9 Dave FM’s “Dave After Tomorrow” at 8PM Tuesday night where they’ll be playing songs from the bonus CD. Throughout the day tomorrow Dave FM will be holding R.E.M. giveaways during “Fables Day.”

Finally, if you’re in Athens tomorrow night, July 13th, be sure to stop by Cine on Hancock Avenue where R.E.M. Live: Rockpalast 1985 will be screening at 7:30p & 9:30p. This is one of the band’s legendary performances, so don’t miss it.

Although it won’t be available in the USA until late September, Tired Pony’s debut album– The Place We Ran From— was released in Europe today. The group features Snow Patrol’s Gary Lightbody, Peter Buck, Scott McCaughey, Garret Lee, Iain Archer, Richard Colburn, and Troy Stewart. You can watch the video for their single “Dead American Writers” by clicking here. In other news, the band will play a one-of, sold-out show at the Forum in London on Wednesday night to celebrate the release of their debut album. Order your copy of The Place We Ran From

P.S.: This article by Jeffrey Wenger in the NY Times caught our eye this weekend, not just for its stellar title but for its strong substance.

P.P.S.: And while we’re on the subject of great titles, have a look at this interesting offering by Frank Jacobs in the Utne Reader