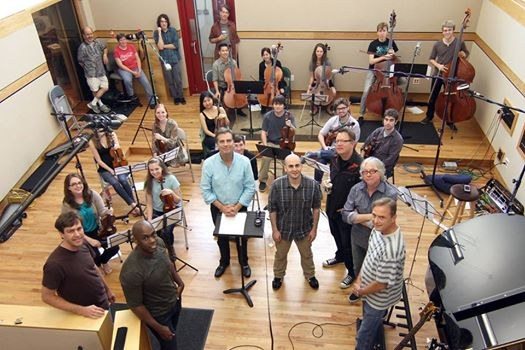 Last weekend Mike Mills realized a long term project in the making when he gathered a group of musicians at 1093 Boulevard Studios and recorded his composition “Concerto for Violin and Rock Band” with his since childhood friend, Robert McDuffie. Mr. McDuffie is an acclaimed concert violinist, having played as a soloist with many of the major orchestras around the world. He is also the founder of both the Rome Chamber Music Festival in Italy and The Robert McDuffie Center for Strings at Mercer University in his native city of Macon, Georgia (where Mike, Bill and Bobby first met).

It was an amazing weekend of music making and a somewhat bold undertaking from a recording standpoint. Additionally, it marked a path (albeit a winding one) from past to present that connected two legendary music cities – Athens and Macon, GA – and a few of their musical luminaries. Mike assembled a “rock band” of local ringers: guitarist John Neff (ex-Drive By Truckers); drummer Patrick Ferguson (Five-Eight) and guitarist Wade Hester (who played in mid 80’s cover/party band Corn Cob Webs with Mike and Bill Berry). Robert invited a 15 piece string section of students from the Center for Strings at Mercer University, as well as an arranger and conductor. The strings and rock band musicians assembled in the main room of the studio and tracked the entire piece live – no small undertaking in itself. The results were, pretty breathtaking from a performance and production standpoint

A brief history of the project (with all the connections and coincidences) is astounding. Mike, Robert and Bill met each other while growing up in Macon during the early-mid 70’s. Mike and Robert sang together in a choir (of which Mike’s parents were also members and Robert’s mother was the choir director.) Oftentimes the two musical families would gather Sunday evenings at the McDuffie home to dine and watch the family friendly, Sunday evening television line-up. During High School Bill Berry and Robert would become acquainted as orchestra members for the Macon Little Theater Community Theater productions of Fiddler on the Roof and Guys and Dolls.

Studio owner Jim Hawkins is no stranger to Macon or Athens music history (or R.E.M. for that matter). He built the recording console in what was to become Capricorn Recording Studios in 1968. He worked there until 1972, when he moved to Athens to open Electro-Acoustic Services. Interestingly, a fresh out of high school, Bill Berry worked as a courier for Paragon Booking in Macon, which at the time were the booking agents for many of the artists on the Capricorn roster. Fast forward to 1984. When it came time to begin work on the pre-production for Fables of The Reconstruction, R.E.M. assembled at 1093 Boulevard (then called Electro-Acoustic) to write, rehearse and track the demos of the album before heading over to England for the actual recording with Joe Boyd. The first song on the record, Feeling Gravitys Pull incidentally marked R.E.M.’s first use of a string quartet. Later in that decade, Jim captured the performances of Swan Swan H and Dream by R.E.M. for what would become the 1987 documentary, Athens, GA: Inside/Out.

How this project between Mike and Robert progresses is up in the air and transpiring. As the realization of a dream that has long been bandied about between the two, the possibilities are enticing and in a word, unique.