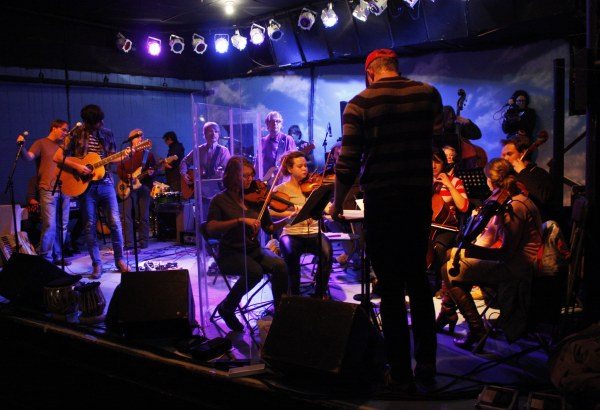 Big Star’s third album, Third/Sister Lovers, has long been revered by artists and critics as one of the most influential albums ever produced. Written and recorded when the legendary 70s band was primarily a studio project consisting of Alex Chilton and Jody Stephens, the third album was never been performed in public with the original string and wind orchestrations. That changed in December 2010, when an all-star band unearthed the original scores, assembled an orchestra and performed Big Star’sÃÂ “Third”ÃÂ at Cat’s Cradle in Carrboro, NC. Performers that night included Jody Stephens (Big Star), Mike Mills, Mitch Easter (Let’s Active), Chris Stamey (the dB’s) — the creative genesis they experienced prompted plans for a historic concert in New York City.

Tickets are currently on sale!

On March 26th, a mind-boggling array of indie rock all-stars will gather to perform Big Star’s “Third” at Mason Hall. Mike Mills will join Norman Blake (Teenage Fanclub), Mitch Easter (Let’s Active), Ira Kaplan (Yo La Tengo), Tift Merritt, Will Rigby (the dB’s), Matthew Sweet, Chris Stamey (the dB’s), & Jody Stephens (Big Star)ÃÂ  along with The Lost in the Trees Orchestra with Jane Scarpantoni, Django Haskins (The Old Ceremony), Brett Harris, Sidney Dixon and Matt McMichaels to recreate the original scores and breathe life into a bittersweet album that has impacted generations of musicians. Some very special guests will be announced in the days to come. As the evening unfolds, Chilton and Stephen’s musical ideas that were far ahead of their time 35 years ago will resonate in the hands of a collective of sympathetic, top-notch musicians. “We have been trying to create a concert piece that can have a life in years to come, trying to keep the spirit of the music and make it come across with the right emotions live,” Stamey told Indy Week. “There’s something about this record that connects with my generation, and apparently many generations.”

The assemblage will perform Third/Sister Lovers in its entirety — fans can expect additional Big Star and Chris Bell songs as well. “It’s easier as time passes to revisit that album because it came out of such a dark period,” Big Star drummer Jody Stephens told the Raleigh News and Observer.ÃÂ  “There were brilliant moments in the studio, especially Carl Marsh’s string arrangements, which really take it to a whole other world. But it could be emotionally difficult to watch certain things happen. I was so close to it at the time that I could not see what it was.”

Preparing for the performances was a challenge. ÃÂ “The original written scores for the record were long missing,” Chris Stamey says. “But John Fry at Ardent Records was able to supply us with elements of the original multitrack tapes. Composer Carl Marsh, who wrote the ground-breaking charts for the original record, used these tapes to precisely re-transcribe his arrangements. And I’ve orchestrated anew some other elements of the recordings for the players, in order to recreate live some of the aleatoric studio effects.”

Tickets are now On Sale at the following outlets:

For an informative article on Big Star visit:ÃÂ Magnet