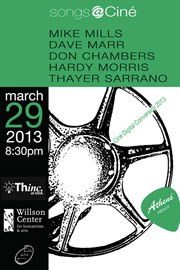 Organized by the University of Georgia Jane and Harry Willson Center for Humanities and Arts and sponsored by the Office of the Vice President for Research as part of its Thinc. at UGA Entrepreneurial Week, Songs @ CinÃÂ© will feature live musical performances by Athens songwriters–including a rare solo appearance by Mike Mills.

The songwriter showcase will be a “song swap,” with five artists onstage simultaneously, playing and singing their songs in turn and sometimes together. Mills will be joined by Don Chambers, veteran Athens singer-songwriter; Dave Marr, formerly of The Star Room Boys; Hardy Morris, lead singer of Dead Confederate; and Thayer Sarrano, Athens singer-songwriter and multi-instrumentalist.

THIS SHOW IS SOLD OUT — NOTE: On the night of the performance, any unclaimed tickets will be released at 8:15 PM at a cost of $35.