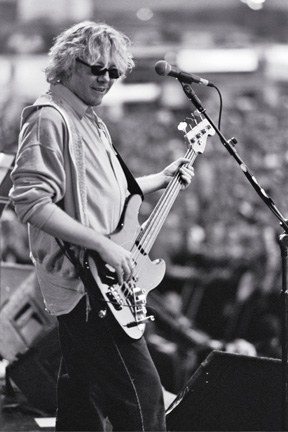 This past weekend, Mike joined Dublin’s The Thrills onstage at the Village for a cover of R.E.M.’s “Be Mine” and Bruce Springsteen’s “Dancing in the Dark.” Mike said, “It was a huge treat for me to play with one of the best bands going, and in one of my favorite cities, too.” Click here to watch a short clip of “Dancing in the Dark.”

IN summer 2003, Dublin quintet The Thrills topped the Irish charts for six weeks with their debut album ‘So Much for the City’, sound-tracking an intense heat-wave.

Four years later and the climate for the band has changed dramatically. They’ve just released their third album, ‘Teenager’, and have chosen to play a relatively intimate launch show in the Village.

Despite the smaller venue, they play with a conviction and passion that suggest this is a band that are in it for the long haul. The early hits ‘Big Sur’ and ‘Santa Cruz (You’re Not that Far)’ have aged exceedingly well and are welcomed like old friends. The rocking ‘Follow My Rosebud’ and Catholic guilt-probing ‘The Irish Keep Gatecrashing’ are both anthems that somehow got away. Newer tracks ‘The Midnight Choir’ and ‘Nothing Changes Around Here’ reveal that the Thrills’ chiming guitar pop has evolved into a more mature and melancholic style that will surprise many of their critics. A glockenspiel adds an interesting sonic dimension to ‘I’m So Sorry’ and ‘Not for All the Love in the World’. And the choice of encores is fascinating.

The night’s trump card is an appearance of Mike Mills of R.E.M.

Many may ask whatever happened to The Thrills? They’re alive and well and playing better than ever.