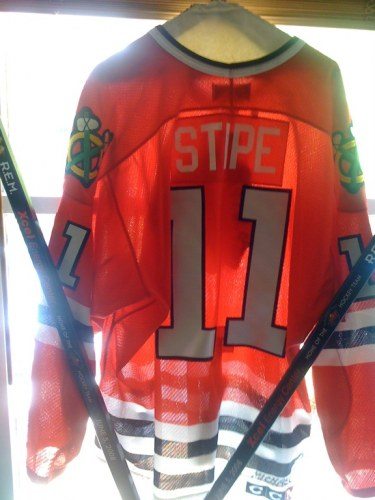 R.E.M. bassist Mike Mills and lead vocalist Michael Stipe announced this morning that they have begun a new side project called the Hockey Guys. The duo has finished recording their first full-length album at an Athens studio with Garret “bulletproof” Lee who took a short hiatus from working on the latest Snow Patrol record to oversee the project. Mills and Stipe are in the process of auditioning drummers and are putting together a tour of the Great Lakes and Canada.

“We’ll probably puck about some of the tailgates before games in various NHL cities and do a sort of guerilla-style/takeaway show-esque improv,” said Mills. “The Baseball Project kinda gave us the inspiration for that model with their Cactus League Spring Training thing, but that’s where the comparisons end. I’ll probably do most of the vocals and Michael will play bass and glock. It should be cool. I hope Michael and I will have a chance to take in some games as well.” Stipe added, “Most Americans don’t understand the game all that well anyway, so the lyrical content will reflect that sense of disorientation and will be fairly elliptical. Mike and I have talked about naming the first album either “The Blue Line” or “Me, Mike Mills, Gordie Howe and Us.” It all makes perfect sense since R.E.M. isn’t touring right now. Plus, Mike’s a big Thrashers’ fan, and we both agreed that this would be a nice homage to his love of the game. I hear there’s a good chance that we’ll play half-time at the Stanley Cup. Is that hockey’s world series? Bertis is working on that, but I can’t say anymore.”