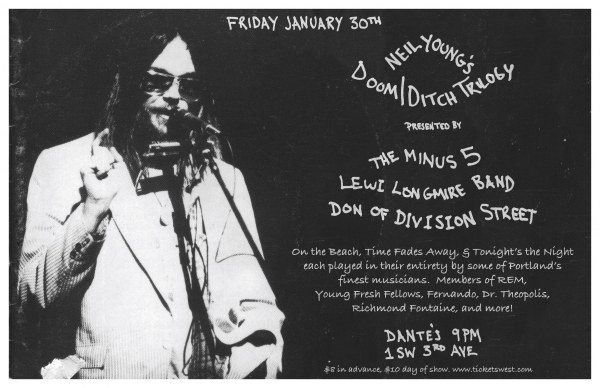 Scott McCaughey reports that he, Peter, Bill Rieflin, and John Ramberg will be among the stellar cast of musicians paying tribute to Neil Young’s famed “Doom/Ditch Trilogy” this evening in Portland at Dante’s. If you’re in the Portland area, this sounds like something not to be missed:

“Celebrate the depths of winter as Neil Young’s Doom Trilogy is presented in its entirety by some of Portland’s finest. The Minus 5, Lewi Longmire Band, and The Don of Division Street Band pay tribute to Neil Young’s mid-70’s, dark masterpieces of rock and roll. Time Fades Away, On the Beach, Tonight’s the Night, collectively known to Young fans as the Doom or Ditch trilogy, were released in the wake of the deaths of two close friends and detail the madness and darkness of this time in his creative life. Musicians from REM, The Young Fresh Fellows, Fernando, Richmond Fontaine, Dr. Theopolis, and others are featured on this night of rock and roll tribute.”

In other Minus Five news, Scott tells us that Peter has been busy adding guitar tracks to the Minus Five’s upcoming record, and that both he and Peter have made guest appearances on the forthcoming Boston Spaceships’ record. Boston Spaceships, Scott says, is “yet another outfit commandeered by Guided By Voices king Robert Pollard.”

Finally, look for Peter, Scott, and Bill–the Venus 3–as they join Robyn Hitchcock on a tour of Australia and Seattle in support of Goodnight Oslo. You can learn more about those dates at Robyn site.