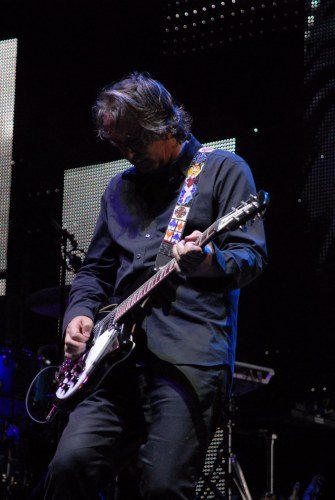 On the way to Istanbul, so not much time to update today . . . Madrid was magical, the place LAS VENTAS (very Verona Arena-like in dimensions and shape and crowd, but okay maybe not quite as old!) is the premier bullring in Spain and quite a venue for a rocking show. Somehow over the years, Madrid always ends up being one of the best shows of the tour. . . 1995 stands out still, and last night’s was no exception. Wednesday night marked the first time this tour Man on the Moon didn’t end the show– for some reason the guys launched into an extended version of Iggy Pop’s classic I Wanna Be Your Dog which they had last played at the Rock and Roll Hall of Fame induction. And the last few songs included the excellent We Are Scientists, who have supported every night since Tallinn the past few weeks–great band and swell guys. Also, some good reviews in the Spanish press this morning: one in English at typicallyspanish.com and a couple for our Spanish readers at El Pais & El Mundo. Now it is on to Istanbul, some uncharted water for us and with great anticipation for the time there and show on Saturday. And then into the “other” Athens where we help MTV launch their latest channel MTV GREECE. From the looks of the place and memories of our 1999 visit there, a free show in the vicinity of the Acropolis seems like a nice way to end this long European tour and head into a brief break before mostly South America in a few weeks. Meanwhile, if it’s Thursday, it must be time for another DEBATE. It will be late in Turkey, but somebody will bring the popcorn I am sure.