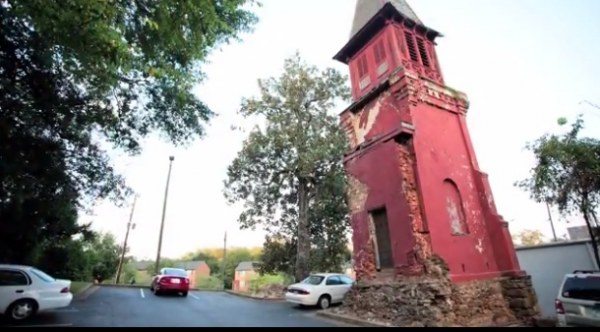 Contributors and supporters of Athens-based nonprofit NuÃÂ§i’s Space, noted Athens-based bands and music fans from around the globe are being asked to help save a historic music landmark as well as provide funding to stabilize the beloved musician-focused organization.

It’s a typical Athens, Georgia story, if you have any familiarity with the music scene here: local bands pulling together to help a cause, using the homegrown, do-it-yourself approach that this town is known for.

But in this case, those bands include R.E.M., the B-52s, Pylon, Widespread Panic, Neutral Milk Hotel, Drive-By Truckers, of Montreal and Danger Mouse, and the project is “Reconstruction of the Steeple,” a campaign to preserve St. Mary’s Episcopal steeple, all that remains of the building where R.E.M. played its first-ever show on April 5, 1980.

On Monday, November 3, NuÃÂ§i’s Space launched an Indiegogo crowdfunding campaign offering unique and, in many cases, one-of-a-kind perks packages from all of the bands listed above. When NuÃÂ§i’s Space put out a call for help (something they are more in the habit of giving to musicians) the music community came running. The list of donated items includes autographed Rickenbacker guitars, a smashed Gibson SG guitar, stage outfits, stage props, artwork, limited edition posters, and autographed music accessories, posters, and albums. There are very rare collectible items being offered during this campaign at set donation prices. It is not an auction.

There will also be a limited number of bricks that had to be removed from the steeple and original church building, each accompanied by a certificate of authenticity from NuÃÂ§i’s Space, R.E.M., and the Athens-Clarke Heritage Foundation.

The significance of St. Mary’s in the annals of pop music is such that Rolling Stone Magazine placed it in their list of music landmarks in the South, alongside the Ryman Auditorium, Sun Studios, Graceland, and the Stax Museum.

Despite its renown, the church itself was demolished in 1990 in order to build condominiums. The remaining steeple stood wholly unprotected and largely ignored until 2011, when city officials informed the condominium owners that it needed to be stabilized or demolished. In April 2013, after two years of careful planning, NuÃÂ§i’s Space accepted ownership of the steeple from its previous owners, the Steeplechase Condominium.

NuÃÂ§i’s Space is a 501(c)(3) health and music resource center, with the goal of preventing suicide by providing obstacle free treatment for musicians suffering from depression and related disorders, as well as assisting the emotional, physical and professional wellbeing of musicians. Although the steeple stands less than ten yards from the back of NuÃÂ§i’s Space and is the iconic symbol of the Athens music scene, historic preservation does not fall within the range of programs and services it offers.

Enter “Reconstruction of the Steeple” founding sponsors Kenneth and Anna Zankel, California restaurateurs, who saw the significance of the project and its potential for bringing greater attention to the work done at NuÃÂ§i’s Space. They gave a restricted donation to be used specifically for the steeple project which allowed Executive Director Bob Sleppy to move forward in August 2013, having Whitsel Construction, a company with more than 30 years experience in the restoration and renovation of historic structures, assess the condition and feasibility of restoring the steeple. Then in October 2013, undertake the first phase of stabilizing the structure. Workers removed a non-load bearing wall that had been damaged, due to years of neglect, and was in danger of immediate collapse. It is now stabilized and awaiting reclamation.

The vision for the steeple, and its surrounding area, is as a meditative space, where clients of Nuci’s Space’s healthcare services, the people who attend support group meetings, the musicians who rent hourly practice spaces, and all visitors to the space can find a peaceful place in which to reflect about life.

It seems appropriate that the music resource services that occur in the shadow of the steeple would grow to finally preserve it, redefining it as a space that directly impacts the lives of the musicians who are such a beloved part of our community.

That’s why Athens most prominent musicians have rallied behind Nuci’s Space, not just to save the steeple, which is a symbol and beacon of Athens’ musical heritage, but because their services have benefited them and their friends, either directly or indirectly, as they help fellow musicians find the balance they need to maintain their creative voices.

Any funding raised above the preservation costs will be used to create a reserve in order to insure that Nuci’s Space continues to fund their present and future programs.

Visit the Indiegogo.com page for more details on how you can contribute to this very worthwhile campaign.