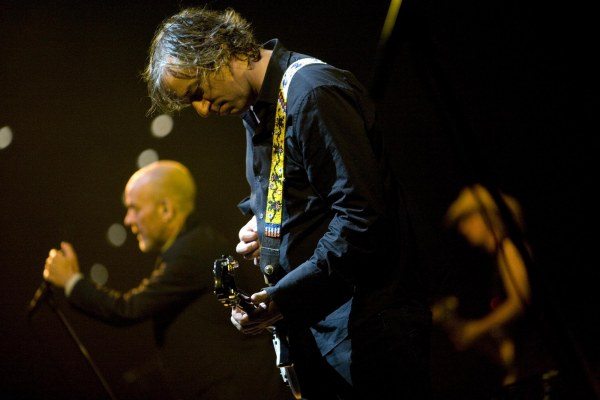 It will come as no surprise to veteran fans of R.E.M. that Peter Buck has continued to record, write, play shows, travel, and read voraciously in the interim between November 18th–the Mexico City finale to R.E.M.’s Accelerate world tour–and now. On February 17th, Goodnight Oslo, the third collaboration between Robyn Hitchcock and The Venus 3–Peter, Scott McCaughey, and Bill Rieflin–was released on Yep Roc records. Earlier in the year, Peter was involved in the recording of The Here and the Gone, Tuatara’s latest record, a unique, joint effort between the Seattle-based band and poet/UGA professor emeritus Coleman Barks. And, towards the end of the month, Peter will join Hitchcock and his Venus 3 band mates on a tour of Australia and the United States. Who knows, Peter may even find some spare time to stop by the R.E.M. tribute at Carnegie Hall in New York City on March 11th.

REMHQ caught up with Peter recently to talk about some of his projects, and here’s the chat that ensued:

HQ: Peter, some people like to take vacations from their day jobs, but you like to work while you’re “on break.” Is this one of the definitive ingredients in the Peter Buck ethos, or, were it not for these great projects and opportunities, would you be doing something else, maybe enjoying some down time?

PETER: I suppose if I had a real job I’d want time off, but music has always been a hobby, and I feel really happy to be able to work with really talented people and help further their vision.

HQ: You’ve had a long and illustrious history with Robyn HItchcock dating back to 1987 when you played on four of the tracks on Globe of Frogs. The two of you worked together again in 1989 on Queen Elvis and later in 1991 on Perspex Island. Those were some of the busiest times ever for R.E.M., but you still found time to collaborate with Robyn. What is it that is so special about this partnership?

PETER: Robyn is a classic song writer, up there with John Lennon or Syd Barrett. It’s a pleasure to be able to contribute to the records. I think Robyn likes the fact that I work really quickly, and it kind of adds energy to the sessions. In the past we have both worked on records that have taken too long and a chemistry where you can work spontaneously and quickly seems to work well for both of us.

HQ: Goodnight Oslo is the official follow-up to Ole! Tarantula although you actually recorded enough material for another record (called Propeller Time) before you recorded “Oslo.” Are you guys exploring similar sounds and territory on “Oslo” as you did on “Ole! Tarantula”? I’m assuming there must be some cohesion between the two since “Propeller” was leapfrogged.

PETER: Somehow in between Ole Tarantula and Goodnight Oslo we recorded enough material for somewhere between one and three albums. We recorded, basically, an acoustic record at Robyn’s house, then a more electric record was done in Tucson and Seattle and most of the electric stuff is what is on Goodnight Oslo, so that is the connection to “Tarantula.” Hopefully some of the acoustic stuff will be released later this year.

HQ: Can you give us a little bit of insight into what it’s like on the bus with the four of you? I mean, the stories must never stop with you, Robyn, Scott, and Bill. Just watching “Sex, Food, Death… and Tarantulas,” made me want to be the proverbial fly on the wall.

PETER: First of all there is not a bus, we are in a van. And, yes, the conversations are really great. Just between Robyn and Bill you have two of the most interesting and intellectual minds on board. We also stop about every hour and a half so Robyn can get a snack. That means we get to see very strange and far flung parts of the world’s highways.

HQ: Tuatara recently worked with Coleman Barks on “The Here and the Gone.” What was it like working with Coleman? Is this the first time you’ve actually spent time in a studio with a poet?

PETER: This is definitely my first experience involving spoken word and music. I’ve known Coleman for about 20 years now and have always loved his writing. Obviously his poetry already was prepared going into the studio. We created the music in the studio to fit the mood and feel of his words. It was very spontaneously and quickly done, which works well for me.

HQ: What are your thoughts on the upcoming tribute to R.E.M. in March at Carnegie Hall? It’s shaping up to be an extraordinary night with a very interesting lineup.

PETER: It’s really an honor to have so many talented people involved. So many people that have influenced me and the other guys in the band wanting to play our music is just amazing. And on the other hand to have influenced others who want to be a part of this is also very moving.

HQ: What’s on the horizon for R.E.M.? Are you looking forward to getting back in the studio at a certain point?

PETER: Within the next few months, Mike and I, Scott and Bill will be recording some demos that are exploratory and sort of a precursor to what will be coming soon. We are really looking forward to starting another full studio record later this year.

HQ: Last question. What have you been reading and listening to recently?

PETER: I’m really excited about the upcoming Thirteenth Floor Elevators box set about to be released and I’ve also been listening to The Phantom Band out of the UK. It’s a combination of folk rock and kraut rock that is really great. As for books, I’m reading Ed Larson’s book about the election of 1800, A Magnificent Catastrophe, right now.