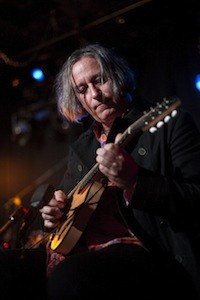 I’ve got a glass with a little bit of Tequila left in it. It was full a few minutes ago. I’ve got Jimmy Reed haunting the turn table in the corner; I’ve been thinking about Jimmy Reed a lot lately, every note of music he ever made was so perfect and full of grace, and yet so loose and spontaneous, I wonder how he did it? What was his secret? If he was still alive I would give him a call. “Hey Mr. Reed how do you do it? Where does it come from?” But I doubt he would know any more than I do. And there I go wandering off track before I even started. I’m supposed to be telling y’all about my solo record….

I know I said for years that I would never make a solo record. It was never a plan or a desire but it just kind of happened. When REM called it a day I’d spent the last 3 months on my back with a semi-crippling injury unable to play guitar. With my band gone and unable to use the fingers on my right hand, I started writing lyrics just to have something creative to do. The lyrics turned into songs and the songs turned into what felt like a possible album, so I called some of my favorite musicians, Scott, Mike, Bill, Lenny Kaye, Corin Tucker, Jenny Conlee, and booked studio time

Not being really confident in my singing, I asked Corin to sing one and she was gracious enough to do so, Scott sang a few, mostly the ones he wrote melodies to. So why is it a solo record? I wrote 95% of the lyrics and most of the music, it is the first thing i have ever been involved in where I was actually in charge and the record turned out to be kind of like a trip through my mind, all of the kinds of music I love, played with some of my favorite musicians, in a completely one take spontaneous atmosphere. It was either call it a Peter Buck record or Richard M Nixon, Lenny Kaye convinced me that it should be called a Peter Buck solo record because it does represent me or at least me right then.

It will be released October 5th on Mississippi Records, a label that specializes in mid-20th century blues, gospel and folk. It was recorded, mixed and mastered on analogue tape and is being released on vinyl. At this point it is a limited edition of 2,000 vinyl only. As for the future I may do some performances, but this is not a career, it is something I am doing for fun.

One last thing. Has anyone ever figured out what was up with James Brown and the Popcorn? I must own 10 James Brown records from the late 60s with popcorn in the title: Mother Popcorn, Low Down Popcorn, It’s a New Day, Let a New man come on and Make the Popcorn, etc. I’ve been thinking about that quite a lot lately. It’s got me kind of worried.